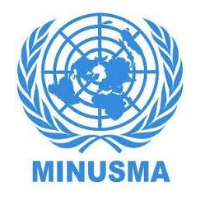 The United Nations Multidimensional Integrated Stabilization Mission in Mali (MINUSMA) was established by Security Council resolution 2100of 25 April 2013 to support political processes in that country and carry out a number of security-related tasks.  The Mission was asked to support the transitional authorities of Mali in the stabilization of the country and implementation of the transitional roadmap.

By unanimously adopting resolution 2164 of 25 June 2014, the Council further decided that the Mission should focus on duties, such as ensuring security, stabilization and protection of civilians; supporting national political dialogue and reconciliation; and assisting the reestablishment of State authority, the rebuilding of the security sector, and the promotion and protection of human rights in that country.