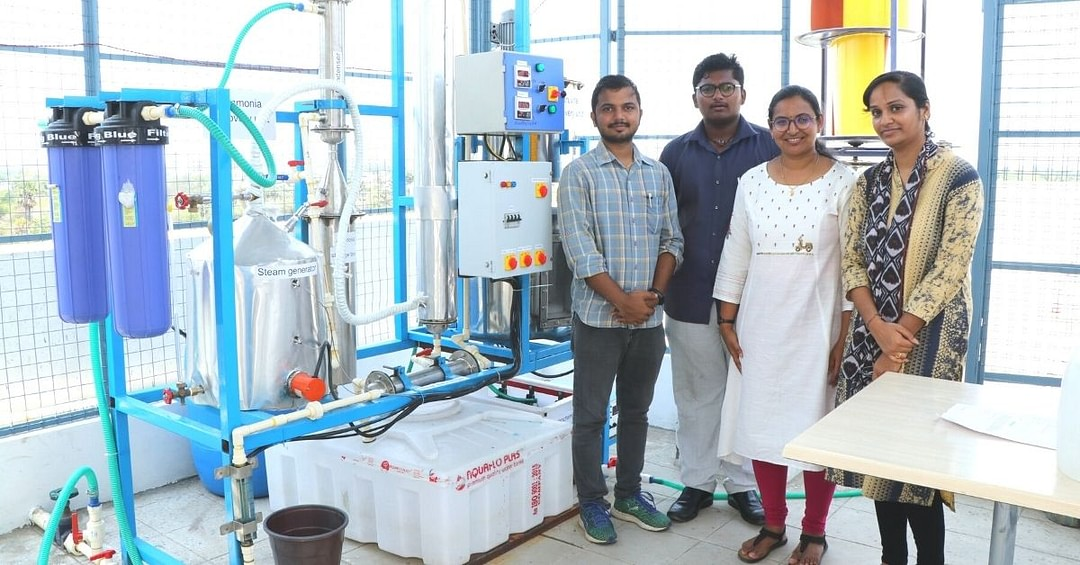 IIT-Madras incubated startup Samudhyoga Waste Chakra has developed the EcoFert, a technology to convert 1,000 litres of urine into 850 litres of water to repurpose for use in toilets and while gardening

In 2018, professors and students of IIT-Madras were gearing up to compete in the Carbon Zero Challenge, organised by the US Embassy in collaboration with the institute in July that year. In preparation, the team identified various environmental issues and brainstormed finding sustainable solutions for the same.

The students, who were from Chennai, were all too familiar with the drought conditions and water scarcity, so they began looking into solutions to deal with wastage of water.

The team conceived a technology to convert urine into water that could be reused for toilets, watering gardens, and other domestic purposes. The unique innovation, EcoFert, helps convert 1,000 litres of urine into 850 litres of water, leaving out organic fertiliser and ammonia, making the latter available for commercial use in the market. The amount of water recycled in a single cycle can help save water for the consumption needs of around 10,000 people a day.

For the successful demonstration of the technology, the group won a prize of Rs 5 lakh in the competition, which enabled them to incubate a startup, Samudhyoga Waste Chakra, in 2019. Dhivakar Govindarajan, technical lead of the project, says water scarcity is a growing concern in the country, as it has been estimated that major cities will run out of natural resources in the coming decades. “Surface water is depleting rapidly, or has been polluted due to discharge of wastewater. Hence, we decided to convert urine into clean water, saving millions of litres per year,” he tells  The Better India .

The inspiration came from their mentor Indumathi Nambi. The professor of the environment and water resources engineering division of the institute’s civil engineering department, says, “The solution came from a visit I made in summer 2018 at the University of California, Daves, the USA. A professor at the university came up with a working model to recycle urine. I was impressed by the technology, which was simple yet effective.”

Indumathi adds that she returned, determined to replicate the model and make it better. “The water retrieved from the plant in the USA was still not reusable, and I wanted to find ways to change it. The team began working on the project accordingly,” she says.

Describing the flow of action, Dhivakar says that urine contains about 96% water and includes other nutrients such as nitrogen, phosphorus, and potassium. “A modest calculation shows that around one crore litres of freshwater expend over a 20-year lifespan from a single toilet. An integrated solution of a self-sustainable modular toilet system can reduce water footprint and generate environment-friendly chemicals,” he adds.

The group worked towards separating these chemicals through various processes to retrieve clean water.

“In the first stage, the undiluted urine is collected in a tank through waterless urinals in toilets. The step helps avoid the use of water for flushing. The urine remains stored in the tank for a day where it undergoes a natural process of hydrolysis with the help of natural bacteria already present in the environment,” Dhivakar explains.

He adds the hydrolysis converts nitrogen in the urine into urea, ammonia and other compounds. “The hydrolysed urine then passes through a steam distillation column where it extracts ammonia from the urine. The steam is then condensed to receive an ammonia solution of around four per cent concentration,” Dhivakar says. Pictorial representation of the process.

He further says that the urine separated from ammonia then pumps to a struvite reactor. “During this stage, the magnesium and ammonium phosphate in the urine is precipitated through the distillation process by adding magnesium salt. The struvite collects at the bottom of the reactor,” Dhivakar adds.

Dhivakar says that at this step, all the chemicals separate and only the salts and few organics remain in the urine. “At this stage, the urine is light yellow in colour. It undergoes a desalination and oxidation process, after which it becomes colourless. Once the process is complete, the water is harmless, and can be used for gardening or repurposed in toilet commodes,” he adds, and warns, “The water obtained is not potable and not recommended for consumption.”