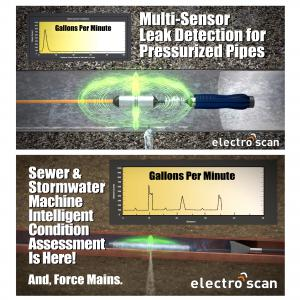 All leaks are located and measured in Gallons per Minute or Liters per Second, without Electro Scan's discovery of about 750 leaks per mile, coupled with locating each leak with 1cm accuracy, without temporary dewatering or bypass pumping, is unprecedented.”

More importantly, Electro Scan's ability to then estimate each leak's potential defect flow rate in Gallons per Minute (GPM) or Liters per Second (LPS), eliminates the guesswork in setting rehabilitation and capital planning priorities, and represents a major competitive solution.

Last month, Electro Scan Inc. was named 'Leak Detection Solution of the Year' for 2021 by IoT Breakthrough for its game changing ability to measure accurate locations and estimate the severity of those leaks in GPM or LPS.

Electro Scan's pipe inspection results since 2011 include over sixty (60) different pipe materials, where over 110 million data points have been generated in testing pipe walls for leaks, wall thickness, joint separation, leaks at service connections, and verifying that newly installed or rehabilitation pipes are watertight.

Often based on visual inspection, alone, Electro Scan has emerged as a new tool to certify full length pipes, including Trenchless cured-in-place pipe (CIPP), to minimize leakage and ensure pipe do not more AFTER rehabilitation, then BEFORE rehabilitation, especially if contractors cause damage to host pipes during the reconnection of service connections.

Electro Scan's new Delta probe system provides for collecting three (3) data sets, including Acoustic signals, CCTV video images, and Low Voltage Conductivity, or FELL data, with each of its pipe surveys. A key feature of the inspection is that the pipe remains in service, without dewatering or bypass pumping, and allows the company to not only estimate the potential flow from each leak along 360-degrees of the pipe’s full length, but also estimate angular joint misalignment, defect lengths, joint coupling spacing, ovality, as well as pipe leaching and pipe wall thickness for ACP.

In contrast to traditional leak detection devices that rely on field operators to see or hear leaks, Electro Scan's patented multi-sensor tethered probes precisely locate leaks to within 3/8th of an inch (1cm), estimate flow rates in GPM or LPS, and are not dependent on pipe pressure conditions to document leak sizes. Moreover, data collection and processing is fully automated and does not rely on operator interpretation or bias.

"Electro Scan's discovery of about '750 Leaks per Mile,' coupled with locating each leak with 1cm accuracy, without temporary dewatering or bypass pumping, is unprecedented," stated Paul Pasko, P.E., Vice President, International Business Development. "Its ability to estimate small leaks from large leaks in Liters per Second or Gallons per Minute, is also impressive."

According to the American Society of Civil Engineers, there are over 240,000 water main breaks annually in the US alone, resulting in an estimated cost of more than $6 billion. Most water main breaks are inspected either by independent contractors or water utility crews.

At the company's current rate of growth, Electro Scan is expected to become the water industry's largest CCTV inspection provider for pressurized pipe.

While typically used for navigational purposes inside the pipe, the high-resolution camera also allows the company to identify obstructions in pipes, such as heavy tuberculation, closed valves, junctions, and illegal tap connections.

Accessible from its award-winning CriticalH2O® & CriticalSewers® cloud applications, pipe inspection data is available in minutes, and in multiple languages, including English, Arabic, Mandarin Chinese, Hindi, and Japanese with measurements in both English and SI units.

Electro Scan Inc. will be entering the commercial plumbing market in 2021 as it develops probes able to find leaks in 1-2 inch (25-50mm) pipe diameters. Since many service connections and homes have plastic pipes, few acoustic sensors are capable of hearing leaks, let alone determining their severity.