After establishing itself as the go-to technology for desalination applications, reverse osmosis now has brine concentration in its sights. Can it succeed where other alternatives to evaporators have failed?

As the importance of brine minimisation grows due to environmental pressures and rising discharge costs, the clamour for systems to meet minimal or zero liquid discharge goals is gaining pace. In the past, traditional reverse osmosis (RO) has rarely been considered as a comprehensive option because of its limitations when treating high salinity waters. However, recent technology advancements are warranting much more deliberation over RO. Over the past two to three years, a number of innovative configurations that aim to overcome the limitations are being tested in the market. In many situations they present a compelling alternative to capex- and opex-intensive evaporative technologies that have traditionally been used for brine concentration with feeds of higher salinity Intelligent configurations of RO operating at either higher pressures (i.e. beyond 1,200 psi) or cascading brine though multiple stages are enabling the input of feeds with total dissolved solids (TDS) levels of over 50,000 mg/L, which produce a permeate and a product brine with concentrations beyond 100,000 mg/L TDS, without the system suffering from highly decreased productivity (declines in flux as brine concentration increases) and severe membrane scaling.

These processes can significantly reduce brine volumes that may need to be fed to an evaporator or discharged to an evaporation pond, as well as obtaining higher permeate recovery. More pointedly, they are actually encroaching on the part of the treatment train for brine concentration that an evaporator would traditionally operate in.

ON A PAR WITH EVAPORATORS
Counter flow RO processes are able to concentrate brine up to levels similar to those that evaporators can achieve, making RO an increasingly compelling option for jobs traditionally suited to brine concentrators.
﻿
Technology landscape
Development of other alternatives to vertical tube falling film (VTFF) brine concentrators has been extensive over the last ten to fifteen years, but they have achieved mixed success in the market. While humidification-dehumidification technologies have gained some traction, others such as forward osmosis and membrane distillation have struggled to fulfil early potential. The emerging RO solutions have the advantage that they are at least based on a mature, familiar desalination technology.
Desalitech has to an extent laid the path for brine concentration with RO with its semi-batch system known as Closed Circuit Desalination. It has some projects concentrating RO reject up to around 80,000 mg/L TDS, but it often competes with traditional RO systems and uses standard equipment. That said, its R&D team is looking to embrace new equipment to run its system at pressures approaching 1,800 psi, and take brine concentration beyond 100,000 mg/L TDS. Another early mover was Israeli company Rotec with its Flow Reversal technology. Similar to Desalitech, it has been focused on replacing or retrofitting existing RO systems with its high recovery solution.
A number of configurations that work downstream of traditional RO systems (i.e. on RO reject) have emerged from the research and development phase, some based on batch operating modes, others using high pressures. Naturally, they all involve processes to allow operation at or above the scaling limit of sparingly soluble salts. Solutions can be single-stage or multistage processes, depending on the nature of the feedwater, as well as the client’s end-goal for discharge.
TAKING RO TO NEW LEVELS
The systems in the market usually either involve high pressure operation or configurations where saline solutions are introduced at the permeate end of a pressure vessel. Counterflow RO technology currently leads the way in maximum concentrations being achieved. 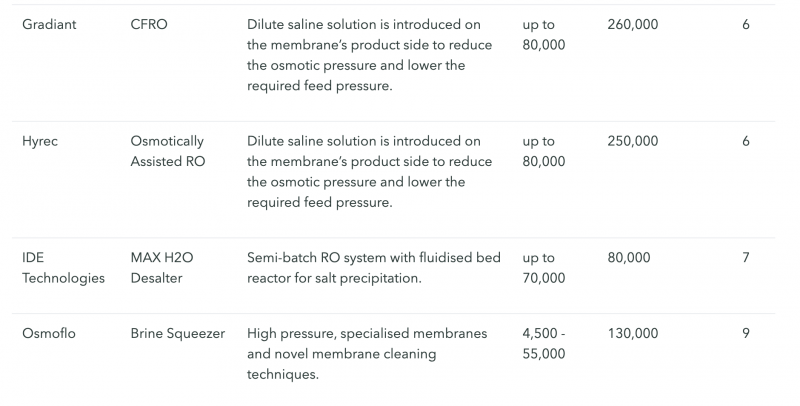 Companies profiled in this article:

Configurations tend to include combinations of some or all of the following: specialised brine preconditioning regimes; use of customised membranes; novel membrane cleaning regimes; novel brine discharge systems; high-pressure operating conditions; clever use of recirculation pumps or energy recovery devices; and advanced control and monitoring practices.
Two of the most promising solutions to emerge are based on counterflow RO, and can concentrate brine to levels far beyond high-pressure RO. Gradiant Corporation and Hyrec each have systems (known as CFRO and Osmotically Assisted RO, respectively) that maintain saline solutions on both the feed and permeate side of an RO membrane, reducing the osmotic pressure difference between each side. This means that high salinity feeds can be treated at hydraulic pressure which never exceeds 1,000 psi, enabling the use of commercially available equipment. Brine is cascaded through multiple stages, concentrating it as high as 250,000 mg/L TDS while a low-TDS product water is also created.

WHICH KIND OF OSMOSIS?

The diagram illustrates the difference between standard RO and counterflow RO, where a second, saline feed stream, known as a diluate stream, is diluted as permeate flows through the membrane. Forward osmosis meanwhile is a different process to RO but requires lower feed pressures.
Source: Bouma/Lienhard
which kind of osmosis?
﻿
Australian company Osmoflo was one of the first to market with a reverse osmosis solution that concentrates brine beyond 100,000 mg/L, launching its Brine Squeezer (OBS) – which uses specialised membranes with a thermally degradable ‘sacrificial’ coating as well as novel membrane cleaning techniques – in 2014.
Other players apply a bespoke pretreatment regime to reduce scalants in the feedwater that could foul and scale the membrane. Saltworks combines its high pressure Xtreme RO solution with its proprietary BrineRefine system – which does not use coagulants – to condition the water and make it “RO-friendly”, according to CEO Ben Sparrow.
Bringing the technology mainstream

The operation of reverse osmosis at high pressures is already a practice served by suppliers such as membrane system specialist Pall in the form of disc tube RO (DTRO), where membranes are arranged as a series of vertically stacked disks in specialty pressure vessels. It is a niche product predominantly used for treating difficult streams such as landfill leachate.

High pressure RO will become more mainstream now that manufacturers including Dupont Water Solutions (formerly Dow) and Hydranautics have released spiral wound membranes that operate at pressures up to 1,800 psi, in addition to an availability of pressure vessels capable of 1,800 psi operation.
Even at higher pressures, these RO systems have notable operational expenditure advantages compared to brine concentrators, particularly at the lower-flow projects commonly seen in industrial applications. Suppliers claim they need roughly half the energy input required compared to thermal solutions, as well as significantly lower capital costs.

In the shorter term, these RO technologies can at least help reduce the size of an evaporator required downstream. Vancouver-based Saltworks already possesses evaporator-crystalliser technology and has a good idea of how it can use RO brine concentration in tandem. “If clients call us and want an evaporator, we often find that with this method they’d only need one Saltmaker S100 evaporator rather than four,” said Sparrow. Using RO may preclude the need for an evaporator completely at small volumes, with the RO brine feeding straight into a crystalliser. Taking 100m3/d of brine, for example, after the RO step into an evaporator may not make sense in the circumstances. Hyrec, headquartered in the Cayman Islands, has a demonstration project concentrating 100m3/d of SWRO brine at a plant owned by the Saline Water Conversion Corporation (SWCC) in Saudi Arabia to produce 70m3/d of permeate, with the remaining brine fed to a crystalliser.
However, suppliers recognise the fact that if an existing source of heat is available at a site then it can be much harder to compete with evaporators because the operating cost of the evaporators may be lower. Nonetheless, energy consumption consistently below 15kWh/m3 for RO compares very favourably with smaller-scale evaporators in industrial applications, which can top out at 35kWh/m3 or more.