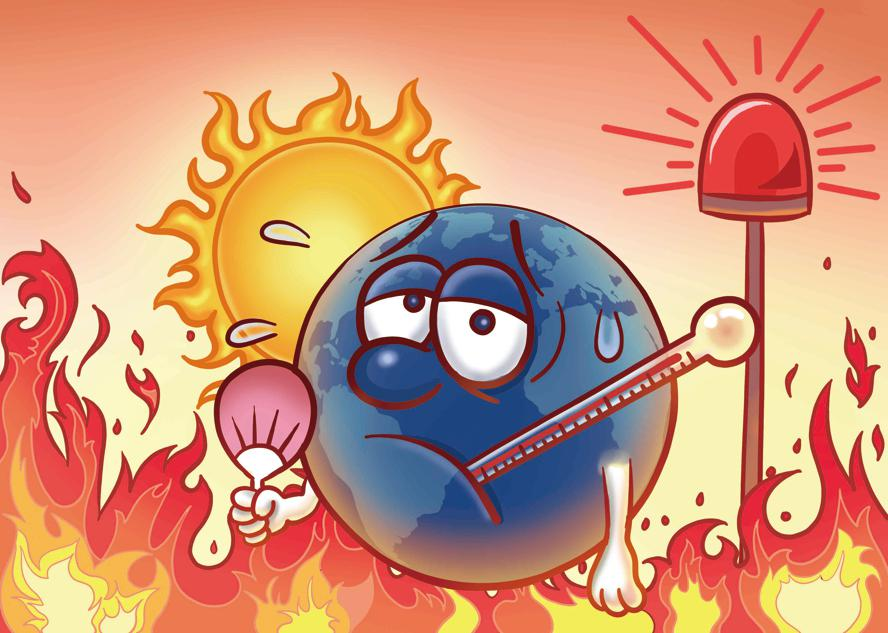 Global warming is producing all types of extreme weather anomalies around the globe. In the past, these extreme weather events were mostly reflected in major floods and prolonged droughts, although in the past decade, wildfires have become rampant and received considerable attention.

But only during the last few years have extreme temperatures drawn global attention, not least because they have been occurring all over the world and all too frequently. This is not to say intense heat waves were not observed in the post-2000 period before the past few years. In August 2003, some 72,000 people died in Europe because of an extreme heat wave considered the hottest in 500 years. Similarly, in 2010, some 56,000 Russians died in another extreme heat wave.

Heat waves intensifying around the world

According to the United Nations Office for Disaster Risk Reduction (UNDRR), the world experienced 405 extreme heat waves from 1998 to 2017, which affected some 97 million people, claimed 166,346 lives and caused economic losses of $61 billion.

The UNDRR reported economic losses from all types of natural disasters during those 20 years. For example, storm damage accounted for some 55 percent of the incidents, compared with about 11 percent for extreme temperature events.

There were also serious flaws in reporting about the natural disasters across the globe. To give an example, less than 14 percent of all natural disasters in Africa were reported. That means the UNDRR data on the impacts of extreme temperature events and other types of natural disasters were grossly underestimated.

Unlike earthquakes and hurricanes, other extreme weather events occur across the world. Asia, the most populous continent, bore the brunt of global natural disasters, including intense heat waves, accounting for 69 percent of all deaths and 78 percent of the total economic loss from 1998 to 2017. Also, 85 percent of all the affected were in Asia.

For residents of cities such as Beijing, New Delhi, Cairo and São Paulo, temperatures of 30 C or 32.5 C－considered very high in the Netherlands and the US－are normal in early summer itself. What is considered a heat wave in Western countries is often below average summer temperature in most of the developing countries. Extreme heat waves therefore have a more devastating impact on developing countries, almost all of which are in the tropics and semi-tropics. In contrast, most of the developed countries are in the temperate region.

However, as the world warms, even countries in the temperate region such as Canada and the United Kingdom are facing extreme heat waves, and their maximum temperature records, set in the past, are falling. Take Canada for example. Between June 25 and July 1, 2021, temperatures in some areas of British Columbia reached 49.6 C, higher than that in Kuwait or Dubai. Similarly, the temperature in London reached the historical high of 40.2 C last month.

What is really worrying is that previous records were broken by a fraction of 1 C. Now, the increase is by 3-5 C, as seen in Canada and the UK.

For a city like New Delhi, the situation is even worse. In May 2022, it recorded its highest ever temperature of 49 C, beating the record of 45.6 C set on April 29, 1941. China, too, is experiencing intense heat waves. In the previous two months alone, heat waves/high temperatures affected about 900 million people in the country.

According to China’s National Climate Center, 71 national weather stations reported record high temperatures this year by the middle of July. While Xi’an, Shaanxi province, witnessed 20 days of 35 C-plus temperatures in June, Shanghai recorded 40.9 C in July, matching its highest ever recorded temperature. Moreover, a scorching heat wave is forecast to smother most parts of the country in the coming two weeks. The summer of 2022 is on track to become the hottest since China began compiling complete meteorological records in 1961.

Even the Arctic town of Verkhoyansk in Siberia, Russia, registered 38 C in June 2020.

No part of the world is free from extreme heat.

There are many direct and indirect impacts of heat waves. Many of them are known; others are not. And since elderly people are the most vulnerable to heat waves and heat-strokes, they need to be especially protected against high temperatures.

Yet heat waves not only jeopardize human health, they also create other serious societal and economic hazards. For instance, they can reduce crop output by 20-30 percent, if not altogether destroy the crops, triggering food price hikes which affect the poor the most.

Heat waves also act as a kind of atmospheric lid which traps air pollutants. Nearly 99 percent of the global population is already breathing air that does not meet the World Health Organization’s health standards, and with heat domes worsening the air quality, the health risks and death rates will rise.

Many indirect impacts of heat waves are not fully understood. Long periods of dry and hot weather or high temperatures are likely to make tree roots grow deeper underground to seek water, and thus reduce soil moisture deep below the ground surface, causing subsidence. In fact, studies show that more than 7.65 million houses in the UK could become vulnerable to medium-to-high subsidence by the 2080s. During the record heat wave in the UK in 2018, about 10,000 households sought insurance claims of about£64 million for soil subsidence in just three months. Such claims are likely to increase exponentially.

What can be done to curb heat waves?

Unfortunately, not much research has been done on how to keep urban centers cool amid heat waves until recently. But since we know that cities are 2-4 C warmer than their surrounding areas, there is a need to carry out studies to find ways to protect cities against “urban heat island effect”. Buildings, roads and other infrastructure absorb the sun’s rays and re-emit the heat more than natural landscapes like a cluster of trees, forests and water bodies, so urban areas where such structures are concentrated and greenery is sparse become “islands” of heat or higher temperatures relative to the outlying areas.

Actually, research is accelerating on how buildings and cities can be designed and landscaped to keep them cooler. Even the buildings’ colors could be a factor, as lighter colours reflect more of the sun’s rays and can help to lower the temperatures in the buildings’ interiors and the areas around them.

The speed at which global warming is intensifying, global temperatures have already risen by over 1 C, and the frequency and intensity with which it’s causing extreme weather events, including heat waves, has taken most scientists by surprise.

Climate change will continue to worsen till at least 2060 given the cumulative global GHG emissions since the Industrial Revolution, irrespective of what happens in the coming years. Accordingly, people all over the world will have to live with and adapt to extreme weather conditions and events for many decades to come.