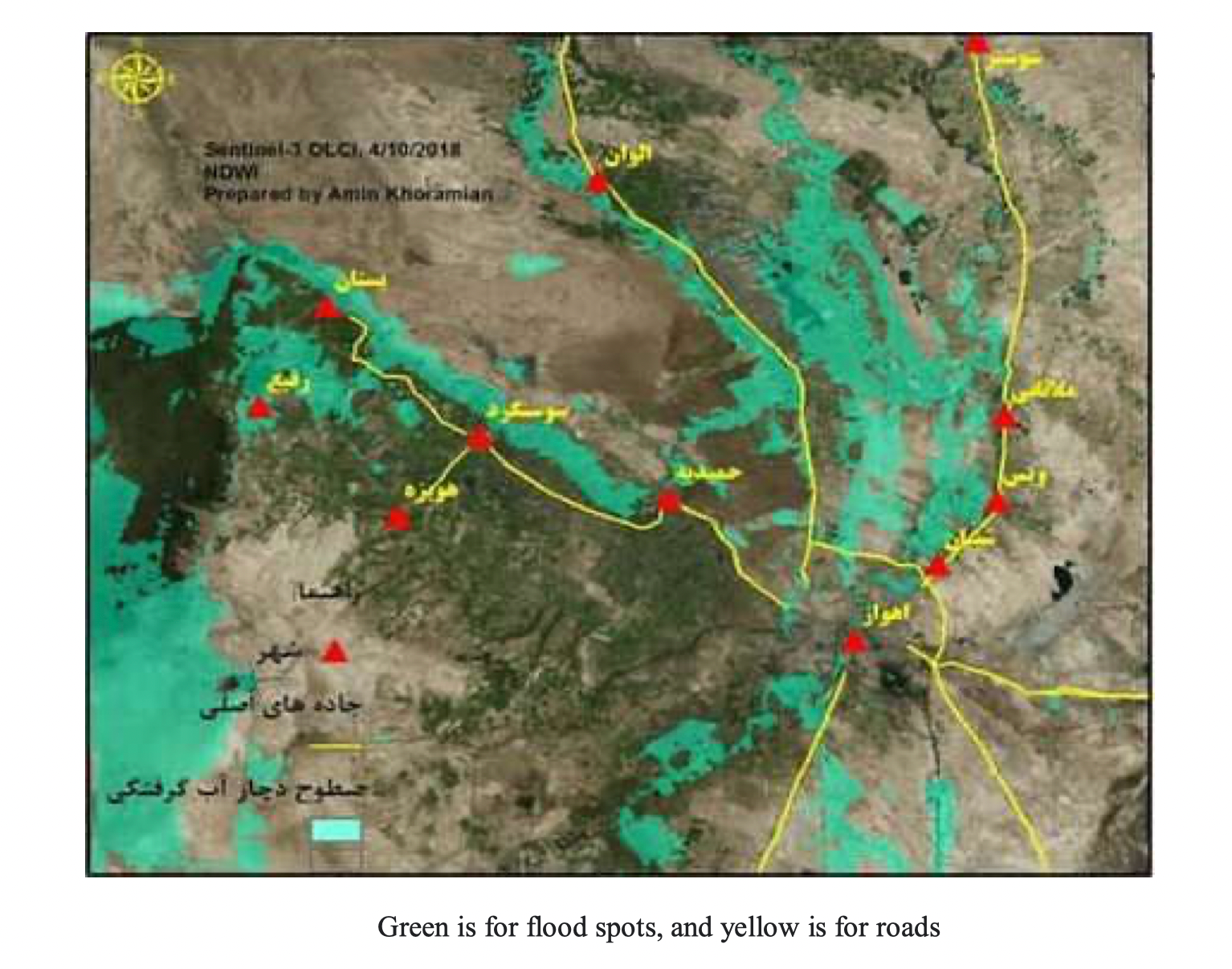 This is an article written by Water network member Alireza Makvandi and posted on their behalf.

Floods, despite the great damage, can be considered an opportunity due to the many benefits such as: storage of huge water resources, filling of aquifers, washing of eroded soils from recent years and replacement of arable land.

Green is for flood spots, and yellow is for roads

When it rains and snows, some water is absorbed by the soil and plants, a percentage evaporates, and the rest flows and is called runoff.

Flooding occurs when soil and plants are unable to absorb rainfall and as a result the natural channel of the river does not have the traction of runoff. On average, about 30% of rainfall is

1 converted to runoff, which increases with melting snow. Floods that occur in different ways create an area called floodplain around the river.

River floods are often caused by heavy rainfall, which in some cases is accompanied by melting snow. A flood that flows into a river without warning or a little warning is called a flash flood. The death toll from these flash floods, which occur in small areas, is generally higher than the death toll from floods in large rivers. Extreme levels of flood danger were announced in small areas, usually higher than in large rivers.

Coastal areas are also exposed to flooding caused by waves from severe storms on the surface of the oceans or waves caused by earthquakes. Floods not only damage property and endanger human and animal lives, but also have other effects. Runoff from heavy rainfall causes soil erosion upstream and sedimentation problems downstream. Habitats for fish and other animals are often destroyed by floods. High flow velocity increases damage. Prolonged floods stop traffic and impede drainage and economic use of land. Bridge supports, riverbanks, sewers and other structures are damaged, disrupting shipping and hydropower generation. The economic costs of floods around the world are estimated at tens of billions of dollars annually.

2 How to deal with floods

In general, in the face of the phenomenon of flood and the control and relative reduction of human and financial losses resulting from it, there are three perspectives: structural, nonstructural and combined. From a structural point of view, flood control, by organizing the river and constructing flood control buildings such as: reservoir dams, delay dams, creating longitudinal coastal embankments and dam walls, correcting the route and cross section of the river, digging auxiliary floods, constructing irrigation stations and building stations. Watershed, partial control of destructive floods is possible. Since the 1950s, the use of structural criteria has been questioned as the most effective solution to contain and reduce the human and financial losses caused by floods. In the non-structural view, by predicting the magnitude of the flood downstream and in the vicinity of population centers, it is possible to issue the necessary warnings to evacuate the population centers. Installation of flood warning systems makes it possible to contain and partially reduce flood damage.

It is clear that in all three perspectives, access to the intensity and magnitude of destructive floods in the vicinity of population centers by monitoring the phenomenon or its simulation is essential.