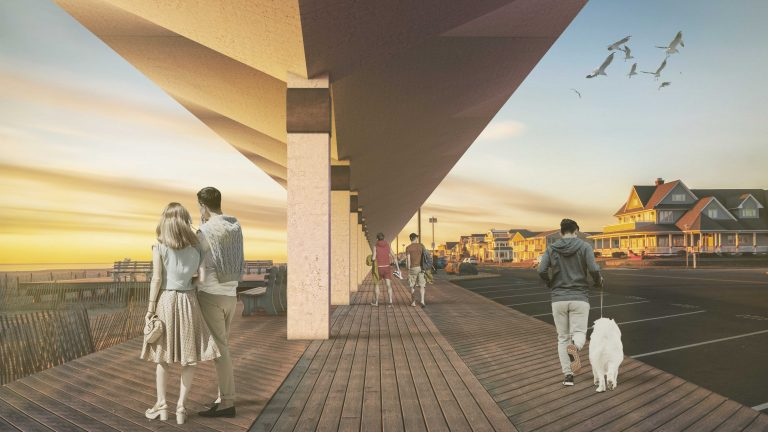 Building seawalls around high-traffic coastal areas such as piers, boardwalks, and beachfronts often can provide suitable protection from storm surges, but this added security can entail a social cost.

In many cases, seawalls obstruct ocean views. Even worse, while seawalls may confine floodwaters to the beach, they also can restrict convenient ocean access by pedestrians when storm-surge risks are low. Coastal flood managers considering seawalls often must balance the value of flood protection with the recreational and economic value of beach tourism. 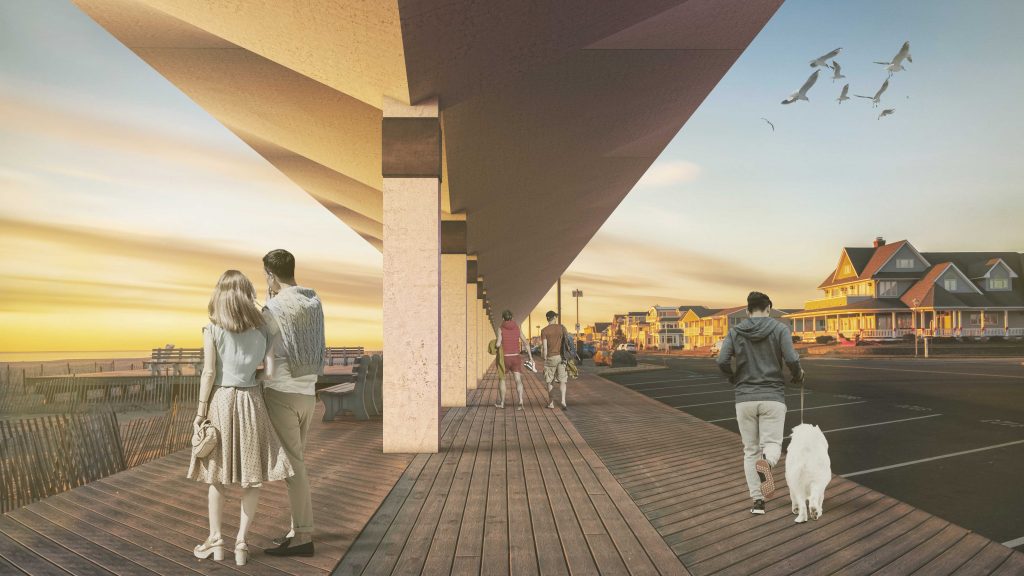 Concept renderings for a new type of seawall being developed by Princeton University (New Jersey) researchers depict a versatile structure that could provide beachside shade during sunny weather, and pivot into a coastal flooding countermeasure in advance of heavy storms. Image courtesy of Mauricio Loyola/Princeton University

Ongoing research by Princeton University (New Jersey) engineers may offer a solution. By borrowing concepts from architectural design, the engineers are testing a new type of seawall that would both enhance the pedestrian experience during normal weather conditions as well as provide sufficient flood protection during high tides and heavy storms.

“This is so much more than just your typical coastal defensive structure,” said Shengzhe Wang, a Princeton civil and environmental engineering researcher and lead author of a new article about the design, said in a release. “It’s the first time that anyone has really tried to integrate architecture as an inherent component to a coastal countermeasure.”

Most of the time, the Princeton team’s design would resemble a saddle – a structure that curves inward along one axis and outward along the other, known as a  hyperbolic paraboloid  or  hypar . Instead of obstructing ocean views, the inactive seawalls would rest on thin columns, and provide shade and shelter to beachside pedestrian walkways.

However, in advance of heavy storms that could intensify coastal flood risks, a hinge at the point where the column meets the barrier would enable the structure to pivot into place as a coastal countermeasure. In an article detailing computer-modeled, structural stress-testing results, the researchers describe that a series of sensors and actuators could enable communities to operate the seawalls remotely, or even program them to pivot automatically when the forecast calls for storms. The article appears in the  Journal of Structural Engineering. 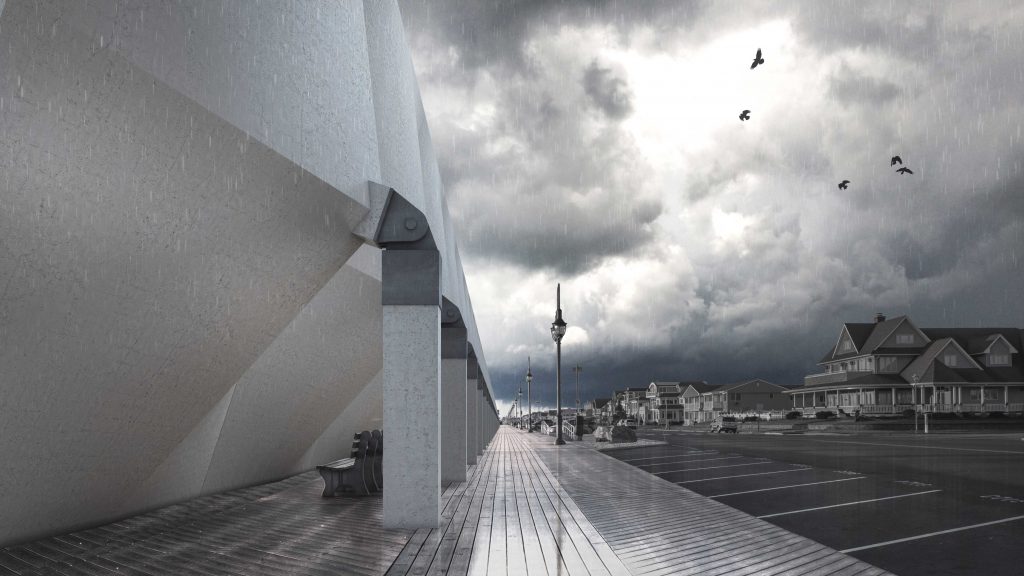 Computer simulations found that the Princeton team’s seawalls would remain strong and steady when facing water levels up to 75% of their deployed height. The team trained the simulation using more than 100 years of eastern U.S. storm-surge data. Image courtesy of Mauricio Loyola/Princeton University

Each section of the barrier would consist of 10-cm-thick (4-in.-thick) reinforced concrete shells measuring about 8 m (26 ft) on each side, according to the article. The columns, each measuring about 3-m-high (10-ft-high), would be tall enough to provide ample shade and make vandalizing the shells difficult, said co-author Maria Garlock, Princeton professor of civil and environmental engineering, in the statement.

“These shells are so thin that anyone looking at this would not be inclined to believe that these structures would be capable of stopping such large forces from water,” Garlock said. “But we’re able to take advantage of the geometry of the hypar shape that gives the structure the additional strength that’s required.”

Using computer simulations, the project team operationalized more than a century of storm-surge data from across the U.S. East Coast to model the performance of the hypar structures against real-world hurricanes and other major storms. Standard measures for estimating fluid-structure interaction showed that the structures would remain stable against water levels up to about 75% of their deployed height, according to the study.