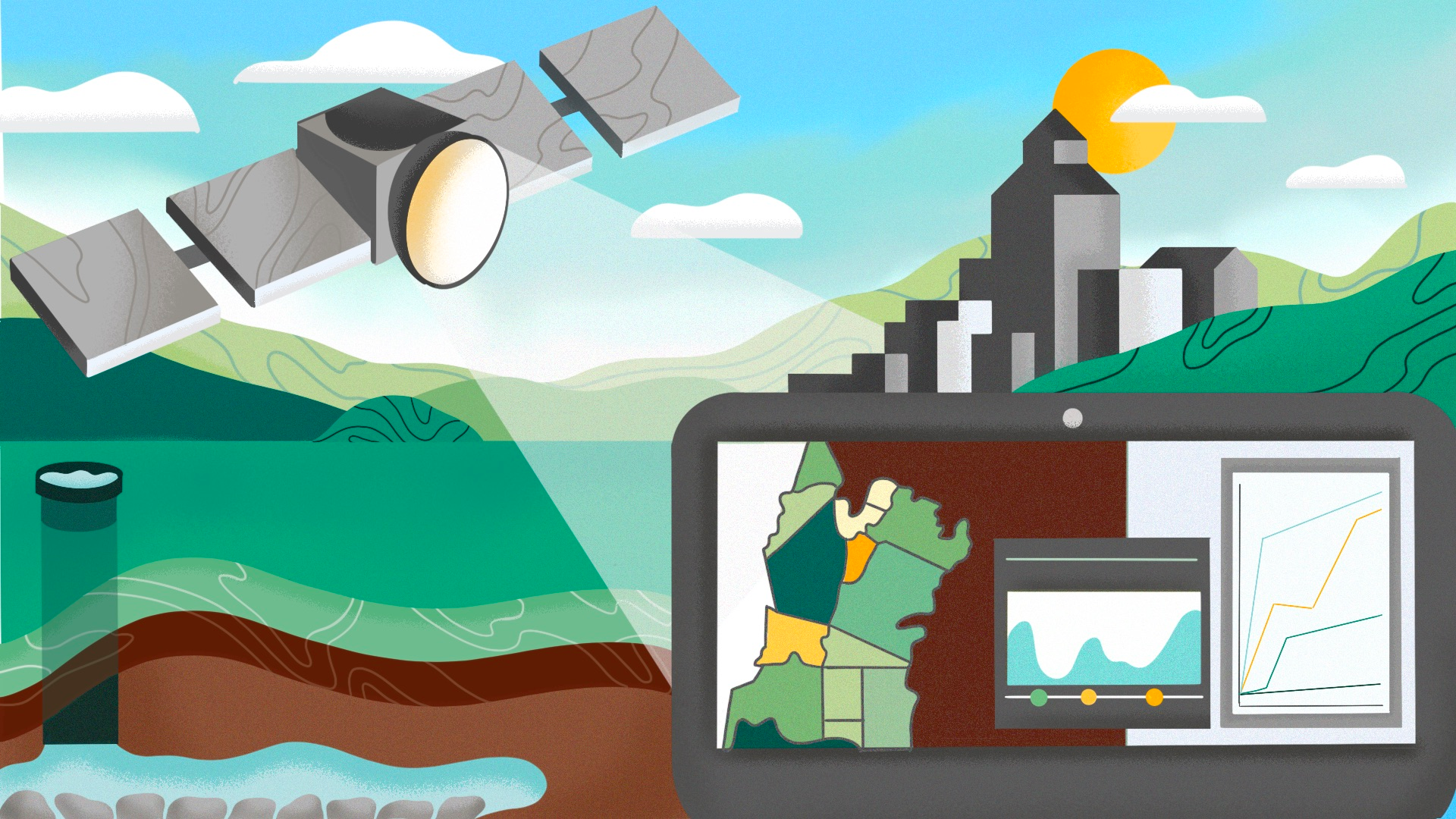 Groundwater makes up 30 to 50 percent  of California’s water supply, but until recently there were few restrictions placed on its retrieval. Then in 2014 California became the last Western state to require regulation of its groundwater. With deadlines starting this year, for the first time water managers in the nation’s premier agricultural region – the state’s Central Valley – are tasked with estimating available groundwater. It’s a daunting technological challenge.

“Drought has been prevalent throughout California’s history and is inevitable in the future. The traditional methods for measuring groundwater levels have limitations for the type of integrated management required under SGMA,” said Peter Nico, a Berkeley Lab environmental geochemist, and researcher involved in the effort. “Using this technique, it’s possible to create a ‘living’ model of groundwater resources for the Central Valley that could be updated frequently and used at either a very local scale or a very large scale.”

The method applies one of Berkeley Lab’s key strengths – computing – to an area that is a significant point of focus for the Lab: water sustainability. The scientists believe it could lay the framework needed for water managers to portray Central Valley groundwater resources at a small, local scale and also at a broader scale that takes into account aggregated resources from various nearby jurisdictions.

In this project, the scientists leveraged data obtained from Synthetic Aperture Radar (SAR) satellites representing observed surface subsidence, or where land is sinking and groundwater storage capacity has shrunk. Such data provides a far more detailed and macro-level snapshot of aquifer compaction, a process that is sensitive to groundwater levels across the Central Valley. They paired the satellite observations with a public database of wells drilled in California in order to estimate the spatial distribution of the aquifer volume that is lost each month in the state due to pumping.

Their findings, published recently in the Nature journal Scientific Reports, suggest that aquifer volume is influenced by variations in effective pressure in the ground surrounding documented wells. For the periods studied, the spatial patterns of changes in aquifer volume vary significantly among years representing drought (October 2015 to 2016), precipitation (2017), and near-average rainfall (2018), reflecting the deviations in groundwater pumping, which change depending upon surface water deliveries to farmers.

The researchers believe their methods could be relatively simple for local groundwater sustainability agencies to implement because the spatially explicit estimates of aquifer volume loss are relatively inexpensive to obtain, and can be used by local agencies to estimate localized areas of intensive pumping and groundwater overconsumption.

“This technique makes it possible to assess groundwater resources not just at the very local level, but at a larger scale, in order to be of benefit to multiple stakeholders,” Nico said.

Drilling a hole to access groundwater. For a long time, groundwater was regularly pumped in California to meet water needs when surface water coming from rivers, lakes, and streams was inadequate. With the recent SGMA legislation, state lawmakers hope to halt overdraft and bring critically overdrawn groundwater basins into balanced levels of pumping and recharge by 2040. (Credit: Shutterstock)

For a long time, groundwater was regularly pumped in California to meet water needs when surface water coming from rivers, lakes, and streams was inadequate – so much so during the many years of persistent drought that massive over-pumping pushed the state to pass the SGMA legislation.

Unfortunately, there’s no cost-effective method that has proven useful for monitoring aquifer storage in sufficiently high resolution yet over needed spatial extents, even in highly developed agricultural areas such as California’s Central Valley, according to Don Vasco, Berkeley Lab senior scientist and lead author of the paper for Scientific Reports.

For example, an approach utilizing observed water levels in monitoring boreholes throughout the Central Valley to indicate aquifer status is largely ineffective, because boreholes are usually shallow and may not accurately represent the health of deeper aquifers. Nor would the typically sparsely distributed boreholes provide information over sufficient spatial extents to detect localized areas of high water use.

“Monitoring is critical in assessing the loss of storage capacity in a given aquifer – and in determining the rate of groundwater depletion – at a resolution that corresponds with the needs of agencies responsible for groundwater management, from a few kilometers to tens of kilometers,” said Vasco.

The Public Policy Institute of California recently evaluated 36 groundwater sustainability plans submitted to the state for 11 critically overdrawn basins in the San Joaquin Valley – California’s largest farming region. Their review identified the potential pitfalls of hyperlocal management, showing that while water supply estimates may appear reasonable when the plans are considered individually, reviewing the plans in aggregate exposes the potential that exists for double-counting water supplies by taking such a localized approach.

This perspective highlights the need for an integrated monitoring tool that can be applied at the small scale but also provide an integrated look across large jurisdictions encompassing multiple management areas to prevent any impacts from falling through the cracks.

“If adopted statewide, the computing approach that we have developed could allow the new local groundwater sustainability agencies (GSAs) established under SGMA to estimate the spatial variation of groundwater usage for their own area and the larger region at the same time,” Nico said.

The technique could also become a new approach that stakeholders in other U.S. states as well as other nations could consider as part of their water management strategies, the researchers said.

The effort is supported by Berkeley Lab’s Laboratory Directed Research and Development (LDRD) program, through which the Lab directs funding to specific areas of research.

Founded in 1931 on the belief that the biggest scientific challenges are best addressed by teams, Lawrence Berkeley National Laboratory and its scientists have been recognized with 13 Nobel Prizes. Today, Berkeley Lab researchers develop sustainable energy and environmental solutions, create useful new materials, advance the frontiers of computing, and probe the mysteries of life, matter, and the universe. Scientists from around the world rely on the Lab’s facilities for their own discovery science. Berkeley Lab is a multiprogram national laboratory, managed by the University of California for the U.S. Department of Energy’s Office of Science.

DOE’s Office of Science is the single largest supporter of basic research in the physical sciences in the United States, and is working to address some of the most pressing challenges of our time. For more information, please visit energy.gov/science.