A Newly Developed System Allows Handwashing Water to be Recycled 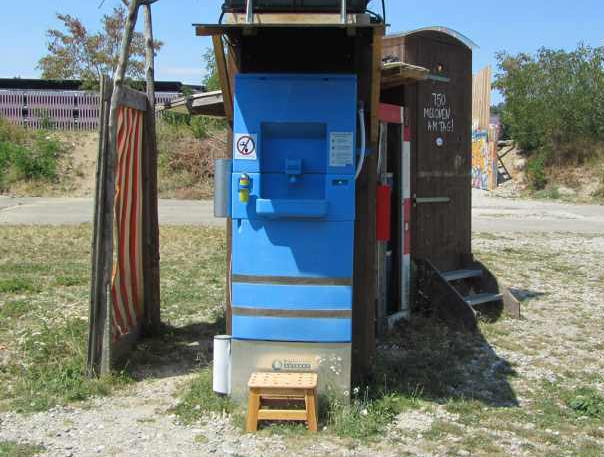 Even though the water we’ve used for washing hands is barely contaminated, it usually goes down the drain. A newly developed system allows handwashing water to be recycled, thus not only saving water, but also helping to prevent infectious diseases in developing countries.

Every year, according to WHO figures, around four million people die as a result of diarrhoeal diseases or respiratory infections. Particularly in developing countries, these deaths are largely attributable to poor hygiene – the problem would be significantly alleviated by regular handwashing. But how can this be achieved in places where people lack access to safe water, or piped water is unavailable?

Local water treatment: The recycling plant for slightly contaminated wastewater in the field test in summer 2018 in the Hardturm Stadionbrache in Zurich. (Image: Eva Reynaert/Eawag)

This issue is being addressed by a group of environmental engineers led by ETH Professor Eberhard Morgenroth (Head of Process Engineering at Eawag), carrying out research as part of the Blue Diversion Autarky project. They have now developed a grid-free treatment system allowing greywater – relatively clean wastewater from showering, bathing or handwashing – to be repeatedly recycled.

As Morgenroth points out, while commercial systems are already available which enable greywater to be treated on-site for use in toilet flushing, the recycled water does not meet the required quality standards to be used for other purposes.

This is not true of the water treatment system developed by Morgenroth’s team over the past seven years, in collaboration with microbiologists, social scientists, urban planners and industrial designers: after several treatment stages, the greywater is odour‑free and colourless, with a bacterial count lower than that of Zurich tap water.

The key component of the system is a fine-pored plastic (ultrafiltration) membrane, which retains pathogenic organisms. The microbial biofilm which develops on the membrane breaks down the fecal and urinary contaminants in wastewater. However, because nutrient concentrations in handwashing water are relatively low, biological treatment performance rapidly declines: in a study recently published by the research team, the assimilable organic carbon (AOC) removal rate was found to be 85 per cent. The solution, as Morgenroth explains, is simple but effective: “If we add nutrients – such as nitrogen and phosphorus – to the handwashing soap, the bacteria perform very effectively, with a removal rate of almost 100 per cent.”

After ultrafiltration, any traces of organic matter remaining in the wastewater are removed by an activated carbon filter. In the final step, an electrolytic cell is used to produce chlorine from dissolved salt, so as to disinfect the water during storage.

While the system is primarily designed for use in underdeveloped regions, Morgenroth says that, for financial reasons, “It’s unrealistic to expect a company today to produce handwashing stations of this kind only for developing countries.” The team is therefore exploring additional potential applications – for example, in passenger train toilets.

“Rail operators and train equipment suppliers are very interested in the system we’ve developed,” says Morgenroth. He believes that the technology would be economically attractive, since handwashing water would no longer have to be constantly replenished by railway staff. Morgenroth is also convinced that water recycling will become established sooner or later – in Switzerland as well as in other countries – since climate models suggest that droughts are likely to become more frequent in the future: “Increasing numbers of regions will then no longer be able to afford the luxury of using clean drinking water for every application.”

The functionality of the new water treatment system was demonstrated by a two-month field test carried out this summer. A prototype handwashing system was deployed on the former site of the Hardturm stadium (Stadionbrache), currently serving as a communal green space within the city of Zurich. Although the system was sometimes used by over a hundred people per day, sufficient amounts of clean, odour-free, colourless water – free of bacteria and viruses – were available at all times.

The next two-month field test is to take place in an informal settlement in Durban (South Africa), where the system is to be installed in January 2019. The researchers will be investigating whether and how well the system performs over an extended period in this type of setting.

The Blue Diversion Autarky project is funded by the Bill & Melinda Gates Foundation. This article has also been published on the news platform of Eawag.