Aridification is the New Megadrought 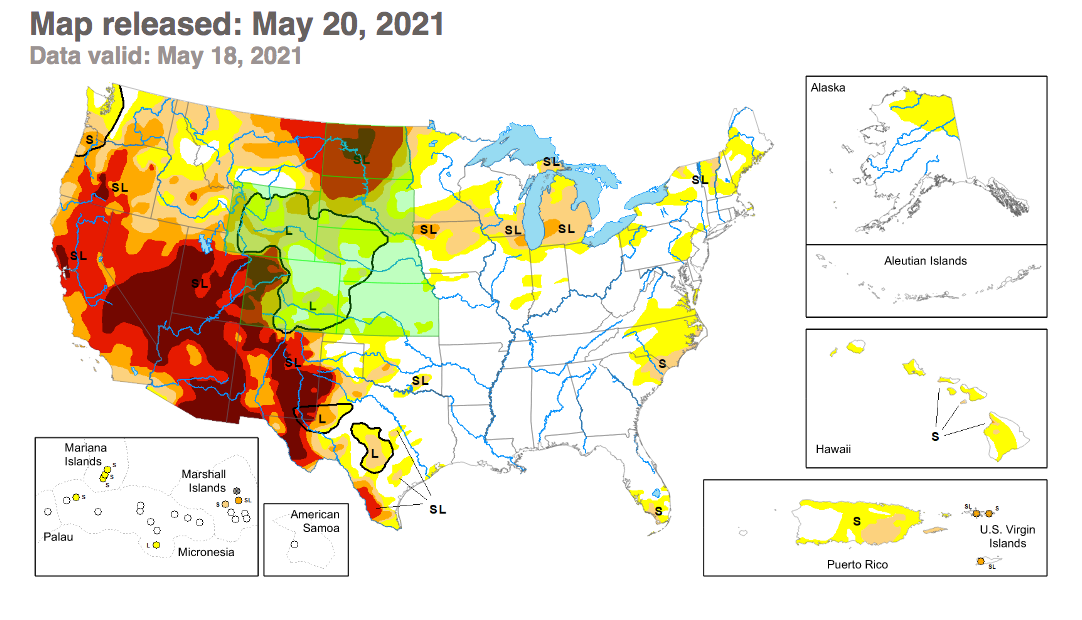 What is going on?

The Western United States is currently preparing for and experiencing what has historically been known as a megadrought. California, Nevada, Utah, Arizona, New Mexico, Texas, and Colorado are all measuring some level of Extreme or Exceptional drought according to the U.S. Drought Monitor . Each state is experiencing some combination of unusually dry monsoon seasons, below-average precipitation, reduced snowpack, early wildfires, and declining runoff and water flows from the regions key water sources of the Colorado River and Rio Grande.

While average statewide precipitation in Arizona between June and March is 11 inches, between June 2020 and March 2021, the state only received four inches. New Mexico is just as dire, with more than 50% of the state in the Exceptional drought category as of April 2021, while a year ago over 50% of the state was drought-free. Nevada is seeing wildfires already starting, and with Lake Mead’s water levels dropping, the Hoover Dam’s power generation will be impacted. Although the drought in Denver is improving, the majority of Western Colorado is in an Exceptional drought. The Sierra Nevada Mountains in California are currently only at 2% of their average snowpack for this time of year and Gavin Newsom has declared drought in two California counties . The situation in Texas isn’t much better, with 75% of the state in a Moderate level drought or worse.

As AIQUEOUS is #DataDriven , we see the cause of these “drought” conditions as clear and pointing to one key issue – warming temperatures driven by climate change. Climate change is no longer a far-off event that we can push on to the next generation to solve. It’s here to stay, currently underway, and already causing life-altering changes.

Aridification is the New Megadrought

Calling the current situation a drought, or even a megadrought , perpetuates a belief that this situation is temporary. A great paper by Overpeck & Udall explains how a drought implies there will be an end to these conditions and average rain and snow levels will return to “normal.” However, there is no drought. This is the new normal. With climate change in our faces, we need a new term. A word that helps the public grasp the severity of the situation and signifies the long-term implications of climate change.

Aridification, or aridity, is emerging as the new term that gives a more accurate depiction of what is really going on. At its base, aridity means “extreme dryness of the kind that can have serious impacts on humans and the natural systems upon which they depend.” Warming temperatures that cause aridity are only going to continue and expand if climate change is occurring. Drought is temporary, aridification is permanent.

The result of an increasingly arid climate is currently being seen in the Southwest and West. Overpeck & Udall lay out the symptoms and solution– progressively lower river flows, drier landscapes, higher forest mortality, and more severe widespread wildfires, not on a year-by-year basis but instead with a clear, long-term trend towards greater aridification that only climate action can stop.

To wrap it up nicely, Overpeck and Udall say; “the good news is that we know the cause of expanding aridification. Unfortunately, climate change and this aridification are likely irreversible on human timescales, so the sooner emissions of greenhouse gases to the atmosphere are eliminated, the sooner the aridification of North America will stop getting worse.” Even with decarbonization targets established within the United States and globally, as a nation we still have to address aridification now. What can and should be done?

The Bureau of Reclamation has laid out several strategies to support reliable water and power deliveries in the West. They are applying climate change information to risk assessments for infrastructure and drought planning and helping to improve decision support tools to manage risks from wildfires. They are currently supporting initiatives that manage risks to water deliveries and water users and support reliable hydropower deliveries and fish and wildlife habitats (page 37-50 of report).

Seven states who rely on the Colorado River signed a short-term drought relief plan through 2026 that lays out possible reductions in water deliveries to lower the risks of the river’s reservoirs hitting extremely low levels. Despite this, the Bureau of Reclamation is predicting the first-ever major water conservation plan will be prompted to go into effect in June as Lake Mead’s water level is currently sitting at 1,079 feet. If the water level falls below 1,075 feet, a federal shortage would be declared. Utah's governor issued an executive order to enact water conservation at all state facilities, and the California Senate has also proposed a $3.4 billion spending budget to sustain programs and projects that will set them up for future dry months.

On a local level, there’s a number of ways small groundwater management districts and regional water planning groups can prepare for these arid conditions as Texas State Climatologist John Nielsen-Gammon lays out in his paper; “ Unprecedented Drought Challenges for Texas Water Resources in a Changing Climate: What Do Researchers and Stakeholders Need to Know? .” It would be beneficial for small groundwater management districts to acquire in-house technical expertise on climate change science instead of relying on management’s personal opinions on climate change when it comes to making climate-related decisions. Having access to qualitative climate change information will drive better-informed and unbiased plans to manage climate change. Regional water planning groups will be better equipped to deal with the arid climate by developing multiple water supply sources that respond to climate change or megadroughts differently, or by developing water supply sources that are unresponsive to climate change.