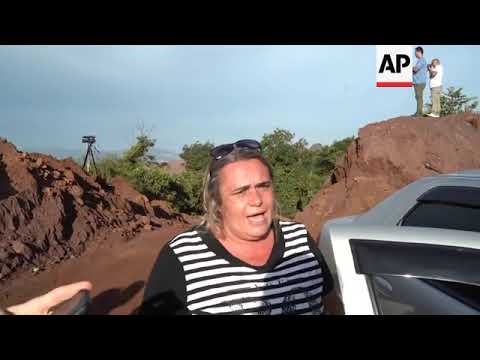 At least 110 people confirmed dead in Brumadinho dam collapse while more than 200 are still unaccounted for. Deadly dam collapse raises fears of a large-scale environmental crisis from the metal-laced slurry.

Earlier today, AlJazeera   reported that no one has been found alive since Saturday, but the Minas Gerais Fire Department said it does not want to stop the search for victims.

The dam that held back iron-ore waste, owned and operated by mining giant Vale, collapsed last Friday , unleashing 12 million cubic meters of mud and debris that buried buildings adjoining the dam and several parts of the small southeastern city of Burmadinho.

This is now considered Brazil's deadliest-ever mine disaster.

AFP agency reports that the mineral-laced slurry released by the collapse could eventually pollute the Sao Francisco River, the second-longest in Brazil, which hosts various species of fish and has many towns along its banks. Unfortunately, many residents along the riverbanks stated that they rely on the river for food and day-to-day necessities.

Daily tests carried out by Brazil’s national water agency ANA in the Paraopeba tributary, muddied along 200 kilometers (120 miles) by the dam burst, show the presence of metals in the water have spiked to unhealthy levels.

The latest ANA results showed iron, magnesium, and aluminum at worrying levels. More on these tests can be read on JapanTimes, while BBC reported on the probable solutions to treat toxic sludge in such capacity.

Bellow is the latest video by the AP agency, that shows the true scale of this enormous tragedy,