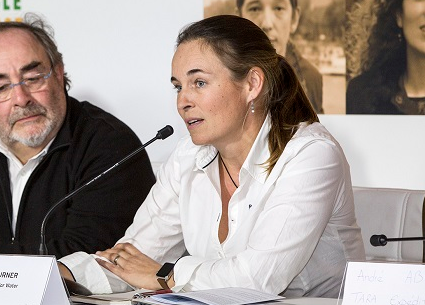 This week, the Water Network team had an interview with Anne-Cecile Turner of the Race for Water Foundation . The Foundation's main goal is to stop water plastic pollution and to create new sources of income for the people most affected by pollution. Using the principles of circular economy and social entrepreneurship, Race for Water Foundation seeks to give an economic value to plastic waste and thus preventing the plastic pollution of our waterways, creating important environmental, social and economic benefits. Anne-Cecil is the Director of the Race for Water Foundation and has over 20 years of experience in the areas of marketing, sponsorship and management. Find out what she has to say about this great project:

Q1. How did you get the idea to start a voyage to raise awareness of plastic pollution in the oceans?

The idea is born from the sea, where the journey started. We initially created a new offshore professional sailing circuit, with a new type of fast one-design trimaran the MOD 70, with the idea of going further than sports performance, that sailing could be used to promote a cause and help to preserve the oceans.

Q2. Why did you decide to focus on plastic pollution in the oceans? Are you planning to raise awareness on other ocean contaminants in the future?

With global warming and the increasing world population, we are convinced that water from the oceans will be key in the future to offset freshwater shortage problems. But the oceans and waterways, in general, are strongly threatened by plastic pollution. We know that plastics make represent more than 80% of marine pollution. This issue is however not very well known yet and this is why we decided to launch the Race for Water Odyssey – an environmental sailing expedition for a first global assessment of marine litter. We plan to use the results of this expedition to understand more precisely how this pollution affects ecosystems and humans in order to better identify and implement solutions to prevent it. With our preliminary observations, we already have a strong belief that this plague must be fought upstream and that we need to find solutions on land that make plastic waste too valuable to be thrown away and enter our waterways.

Q3. Who are your major collaborators in planning the voyage? What are their contributions?

The voyage was planned by the scientific, sailing and logistics teams of the Race for Water Foundation. Our main partners also supported the planning of the expedition, before and during the voyage with their knowledge and expertise. We also have scientific partners: Duke and Oregon State University, the EPFL and the HEIA Fribourg who are taking part in the scientific analyses of the different elements gathered on the polluted beaches. We also have local and punctual partners, such as Swiss embassies and Swissnex for example, who support us on specific stopovers.

Q4. How were the stop-overs for the voyage planned?

The Race for Water Odyssey is an environmental expedition that aims to both raise awareness of marine plastic pollution and collects comparative scientific data in all of the oceans on this very same issue. We, therefore, defined two different types of stop-overs: scientific ones and awareness raising ones. First, we selected islands located in the center of each vortex to make sure we get a representative sampling of plastic pollution in our oceans. Analyzing the beaches of these islands, we get a representative idea of the pollution that soils the surrounding waters. As for the awareness raising stops, we selected global coastal cities in order to reach the maximum of people and meet renowned scientists conducting research on the same issue. In total, by the end of the expedition, we will have stopped in a dozen of countries in the Atlantic, Pacific and Indian Oceans.

Q5. Do you also have collaborators locally in the various countries where the plastic pollution is being tracked? How is the cooperation going so far?

We collaborate with local NGOs, associations and scientists before each stop and onsite. They help us select the most representative spots for our beach samplings and share with us essential information for our analyses. For example, the last time the beach was cleaned or how frequently it is cleaned. Many scientists and associations also helped us organize enriching conferences during our stopovers. One of the greatest outcomes of this expedition is that it allowed us to gather various personalities and organization dedicated to preserving water. We could build an international network of motivated people that are committed to fighting marine plastic pollution.

Q6. How do you plan to disseminate the findings of the voyage?

The data collected during the expedition is currently being analyzed at the Ecole Polytechnique de Lausanne (EPFL - Switzerland), Bordeaux University (France), Duke and Oregon State Universities (USA) and at HEIA Fribourg (Switzerland). We plan to disseminate the findings among the scientific community through these institutions. It is also very important to us to share these results with the community we built during the Odyssey and on social media, to continue raising awareness of the extent of the problem. But this is of course not an exhaustive list and we wish to use all the relevant ways we shall find.

Q7. Will you be involving the public in the islands to also take an active part in the awareness creation campaign?

As one of the main goals of the expedition is to raise awareness of marine plastic pollution, we tried to involve the general public as much as possible. We organized boat visits and public events with children and adults. Thanks to this Odyssey, we already could reach thousands of people.

Q8. What are the major challenges and roadblocks you have faced during this project? In which areas are you looking for additional support?

Our ambassador boat, unfortunately, capsized in September in the Indian Ocean. But luckily everyone is safe and the loss of our trimaran ambassador did not prevent us from continuing the expedition. The support we received during the expedition was great and it strengthen our belief that joining forces is key to fight plastic pollution. Support from institutions, associations, governments and scientists is essential to help us continue our mission.

Q9. What are the future steps for Race for Water foundation? Are more voyages planned for the next year?

After that journey, we have identified that plastic was everywhere and that the efforts should now be focusing on identifying, implementing and promoting the solutions to give value to plastic waste and prevent them from entering the environment.
Race for Water Foundation has entered a new phase, finding innovative technologies allowing to transform plastic waste into new business streams, bringing positive impact to local communities. By creating a circular economy for end-of-life plastics, it will stop the flow of plastic to water and oceans.