In Conversation With: Rodney Herrington, CEO of Aqua Research 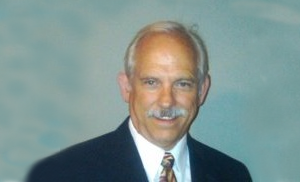 The Water Network team had the pleasure to interview Rodney Herrington, the CEO of Aqua Research.

Rodney Herrington has more than 40 years in product development with focus on water treatment technologies.

Rodney is a graduate of Texas A&M University with a BS in Aerospace Engineering, an MS in Mechanical Engineering, and several post-graduate business courses. 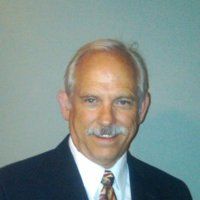 Q1: Thank you for taking the time to talk to us Rodney. Would you please tell us about yourself and your background?

I am a mechanical engineer by training, Masters degree from Texas A&M.  Over the past 45 years I have been in electro-optics, construction, oilfield equipment, nuclear processes, and water for the past 23 years here in Albuquerque.


Q2: How did you get interested in the water sector?

When I moved to New Mexico in 1983 from the oilfield in East Texas, I started work for Los Alamos Technical Associates (LATA) a private engineering firm.  I ran their office in Denver starting in 1985.  During that time we were developing electrolytic water technologies with government small business contracts.  When we started MIOX Corporation in 1994 in Albuquerque, we moved here.  The water technology was high-tech but simple and has some great innovation and world-wide market opportunities.


Q3: You are the CEO of Aqua Research, Aqua Membranes and Aqua Access. Would you please tell us a bit about each of those companies and their goals?

At the beginning of 2010, MIOX decided to focus on the industrial water markets with the electrolytic technology, and decided to forgo the small systems and some membrane filtration technology that had previously had the benefit of significant funding from government, the Defense Advanced Research Projects Agency (DARPA).

The objective of the DARPA project was to develop a simple, compact and highly effective water treatment system for the individual soldier that could treat any water anywhere to US EPA quality drinking water.

I first started Aqua Access LLC with family funding to pursue all of these technologies and to do consulting in the water industry. About a year later, some investors got excited about the membrane technology and I started Aqua Membranes to keep their investments separate from the electrolytic technologies.

About that same time in 2011, my dad was very interested in supporting the next generation of the small point of use devices, so we started Aqua Research. Aqua Access was primarily focused on consulting and larger commercial electrolytic systems.  At Aqua Research, we developed the H2gO Purifier primarily to make it low cost and sustainable for the developing world. 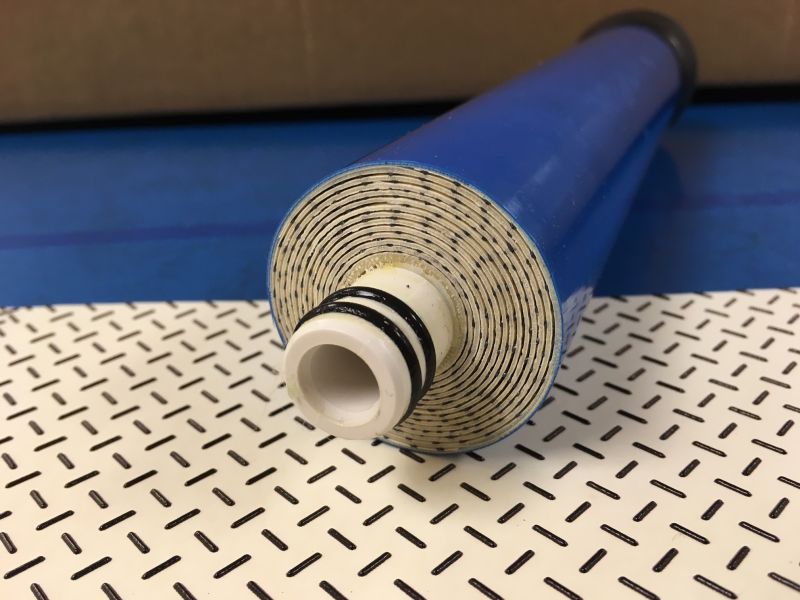 Q4: What exactly are open channel membranes and how do they work?

Membrane filtration technology is what is used to desalinate seawater to convert it in to drinking water, and it is also used to purify drinking water that comes in to your house from the local water utility. It is essentially the same processes that occur in your kidneys and in your digestive track.

These water filtration membranes are made in the form of spiral wound elements that fit in the filtration systems that many people put in their homes.  These membrane filters, on a much bigger scale, are used in large desalination plants world-wide.

The new 50 million gallon per day seawater desalination plant in Carlsbad, CA (San Diego) uses 15,000 of these large conventional elements. The Carlsbad plant is the largest desalination plant in the Western Hemisphere. These membrane elements are actually flat sheets of membrane that are rolled up into a cylinder so that they can fit inside a pressure housing, or vessel.  However, the membrane sheets have to be spaced apart in the rolling process so that feed water can get to all surfaces of the membrane.

A plastic mesh material has been used since the 1970s to fabricate spiral wound elements to keep the membranes separated from each other. However, as feed water flows through the mesh, fouling can occur through biofilm formation, or from scale formation as the water molecules move through the membrane and salt builds up in the feed water side of the membrane element.

With our innovation, we remove the feed spacer mesh material and print the spacer directly on the membrane surface with 3D printing techniques. The printed spacers are much simpler and allow the water to flow much more easily along the membrane surfaces. The process reduces the cost of assembly. It makes the elements easier to assemble. The resulting elements also offer benefits to reverse osmosis systems in terms of various operating system improvements via operational savings. The technology has a lot of industry interest and we are gearing up for production. 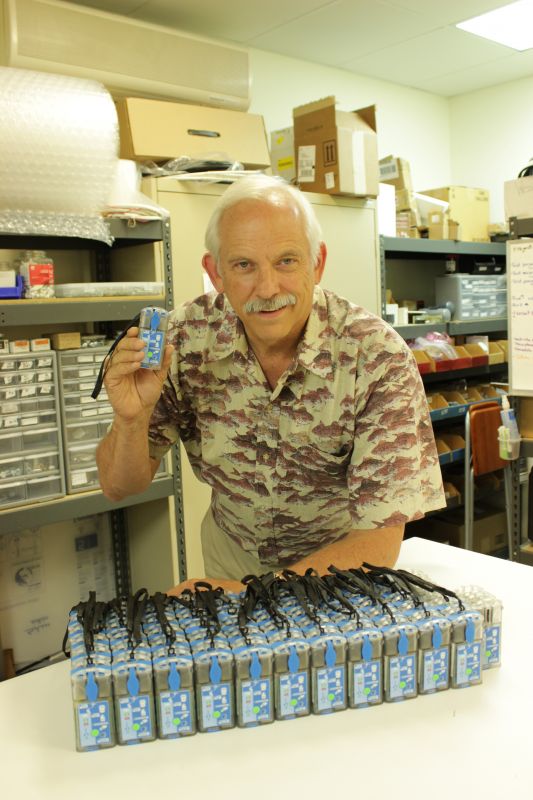 Q5: Would you tell us a bit about the H2gO Purifier and how it works?

Chlorine has been used for more than 100 years in this country and in other countries world-wide to kill the micro-organisms in water and make the water safe to drink.  In 1900, the average life expectancy in the United States was about 47 years. By 1940 we had substantially eliminated typhoid and the life expectancy had grown to 63, and increase of 16 years – primarily associated with treatment of drinking water.

Chlorine treatment of water is generally taken for granted but it is one of the greatest health interventions in history.  Chlorine is made by stripping electrons off of chloride (salt) through electrolysis of salt water.

We have simply taken this process and put it in a 4 ounce hand held device that uses common salt and electricity from a cell phone type battery to make chlorine.  You simply add the small amount of chlorine that is produced in the device to water you have collected from a lake, river, stream or other fresh water source.  It does not desalinate seawater, and it doesn’t filter the water, but it does kill the bugs that make you sick or can kill you.


Q6: What are the most important characteristics of a water purifier and which ones does H2gO Purifier have?

Generally, a good municipal drinking water system will filter the water and will disinfect the water.   For individuals, there are small filters on the market that can filter the water, but they fail without indicating that they have failed, or they get saturated and will no longer work, and many do not remove virus. Our little device works every time.   You can eat a little dirt, but you don’t want to eat the bugs.  It has an on-board solar panel or a standard cell phone USB charger port to recharge the battery.  It is rugged and has been designed to meet military standards.

With the advent of cell phone technology and low-cost solar panels, we can make the purifier inexpensively so that it is affordable by people in the developing world. Once they have the device, it costs about 50 cents per YEAR for the salt it takes to give a family of four safe water for a year. The device can be re-charged more than 500 times and will last ten years with no replacement parts. The device is now available in outdoor stores in the United States as well as on the internet. For the developed world, it is a “nice to have” device.  For the developing world, it is a “need to have” device.

Q8: You collaborate with non-profit organizations (NGOs) around the world to distribute the H2gO Purifier. Is it well accepted and used everywhere?

We have been working with non-government organizations such as Operation Blessing International in Virginia Beach, VA to get the device deployed in the developing world and for disaster relief.  They have used it in Haiti to help eliminate cholera, in Nepal with the earthquake (see video at our website), in Ecuador and other South American countries, in several countries in Africa, and in Europe with the Syrian refugee crisis.  We are also working with the Outreach Program in Iowa, and the Filippini Sisters in New Jersey have deployed the technology in Africa and Asia. The Sisters have recently reported that they have eliminated typhoid in areas where they have used it.  Like any technology, however, you can have the greatest thing in the world, but if people don’t know about it, it won’t be used.

We are beginning a more aggressive program to develop other larger appropriate technologies for larger community applications, and to market the technology more broadly.  Many NGOs have special programs to help save lives and end the misery associated with bad drinking water in low income settings. We are focused on working  with these NGOs.

Q9: Finally, do you have any advice for our readers?

Your readers are generally in the water sector. They are aware of the issues and are trying to help solve water issues. For our membrane technology, we are looking for users who may be interested in the advantages our technology offers. For our small H2gO hand-held device, our market focus is to help end misery and save lives in the developing world and in disaster relief. Your readers can help spread the word through their connections and via social media.

Thank you for your time Rodney!