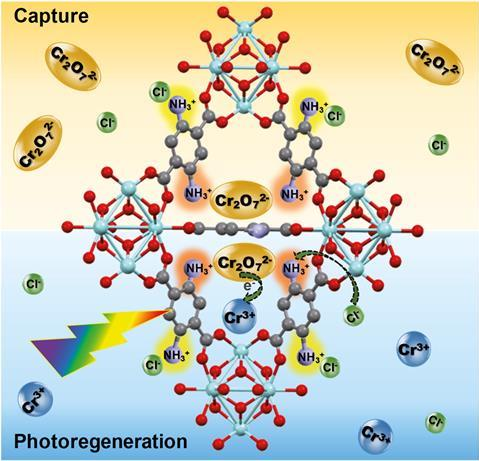 Tests using river water prove system has a high selectivity for Cr(vi), even in the presence of large quantities of competing cations

Scientists have made a material that can selectively remove toxic hexavalent chromium ions (Cr(vi)) from water. The metal–organic frameworks (MOFs) also act as photocatalysts that reduce the Cr(vi) to less harmful Cr(iii) ions when illuminated with light, simultaneously removing and treating the pollutant and making contaminated water drinkable.

Cr(vi) is an extremely toxic and carcinogenic ion used in various industrial processes and can be very harmful if consumed or released into the environment. Currently, most systems for removing Cr(vi) from water rely on adsorption using porous materials such as activated carbons or zeolites, but these suffer from poor selectivity and low capacities.

Now, a team led by Wendy Queen from the Swiss Federal Institute of Technology in Lausanne (EPFL) has created MOF–polymer composites that are highly selective and can efficiently remove chromium from water. They decorated the inside of the MOFs with double amino groups, producing an ion-exchange material that can selectively grab Cr(vi) out of solution, and then bind the functionalised MOF into beads using polymers. ‘When we make these materials they’re fine powders, but to employ them in real applications you have to structure them into beads so that they work in continuous flow,’ explains Queen.

‘MOFs are one of the most effective nanomaterials to pursue adsorption and photocatalytic conversion of various pollutants and this research delivers actionable knowledge on the technological options to address chromium contamination,’ comments Ki-Hyun Kim who researches the removal and treatment of environmental pollutants using MOFs at Hanyang University in South Korea.

The resulting beads adsorb toxic chromium ions and, once they’re saturated, the researchers treat them with a strong, cheap acid while they shine visible light on them. ‘The MOF–polymer composite shows record-high adsorption of Cr(vi) species from water and can be irradiated and regenerated to convert the toxic Cr(vi) into less toxic Cr(iii) waste that is safer to handle and dispose of,’ explains Ashlee Howarth who designs MOFs for adsorption-based removal of contaminants from water at Concordia University in Canada.

This process allows the composite to be reused over several cycles to selectively remove Cr(vi) from complex solutions and purify water to make it drinkable, showing remarkable selectivity even with river water taken straight from the Rhône. ‘High uptake coupled with regeneration of the adsorbent and safe disposal of the toxic waste collected is exactly what is needed for successful and sustainable water treatment processes where adsorbent materials are used,’ adds Howarth. 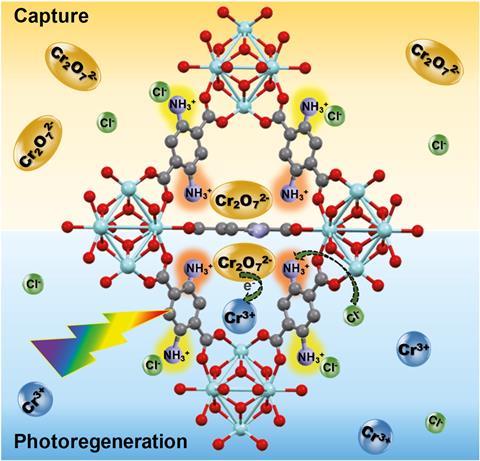 The MOFs play a dual-purpose as both adsorbent and photocatalyst

‘Though the MOF is pricey, it is a promising start to find cheaper and efficient MOF alternatives with consideration of their structural diversities,’ adds Jing Xiao who studies the use of MOFs and other materials for environmental pollution control at the South China University of Technology, China. ‘Excellent Cr(vi) removal performance is achieved with high elimination efficiency and full recyclability, highlighting the great potential of this MOF-based system as a versatile prototype for Cr(vi) removal in practical applications.’

So far, the team has only made the beads in small amounts but the synthesis is readily scalable and Queen plans to begin testing the cycling and remediation capabilities of the materials over extended times. ‘Our goal is to provide materials that can help bring clean water to the people who need it. We want to test this material in the field and apply it to industry or for water purification devices that can be used throughout the world.’