Preparing for Floods on the Third Pole 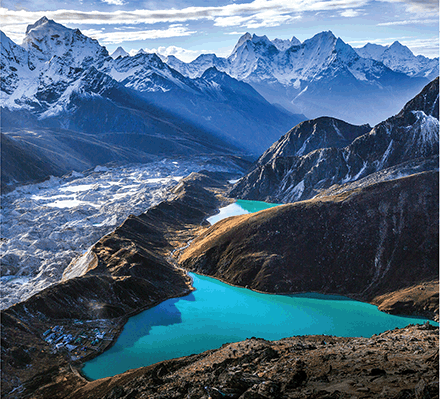 Preparing for floods on the Third Pole

The mountains that include the Himalayan and adjacent ranges are the highest on Earth and have an average elevation of >4000 m and an area of ∼595,000 km2. This region is also called the Third Pole or the Asian water tower because it has the largest ice mass outside the polar regions. Increasing temperatures and human interventions have added stress on the region's hydrological sensitivity and have increased the risks of major flood events.

Over the next 100 years, an estimated 1.5°C of warming will likely be enhancing the melting rates of glaciers, which have already been made fragile by climate change ( 1 ). This situation is evident from the accelerating glacier-ice mass loss, permafrost degradation, increasing extreme temperature and precipitation events, landslides, rapid snowmelt, and a substantial shift in seasonal riverine water supply ( 2 ,  3 ). Additionally, the Indian Summer Monsoon is responsible for 300 cm year−1 of annual rainfall over the south-facing slopes of the Himalayas (see the figure). All of these observations make the region prone to multiple natural hazards, including the increased risks of major flood events ( 3 ,  4 ). Direct human interventions on the rivers, such as the construction of hydroelectric power plants, change the risk profile in other ways ( 5 ).