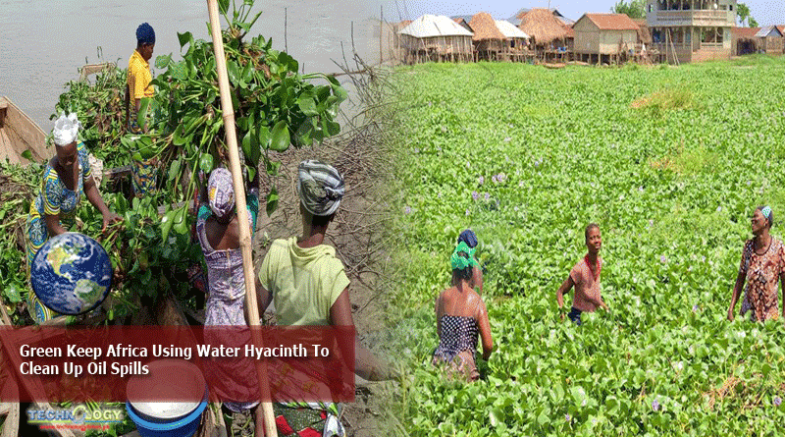 Green Keeper Africa, a startup from Benin, developed a way to reduce the rapid growth of water hyacinth, an invasive species, and clean up oil spills at the same time. The company's solution also generated jobs for many locals.

In Benin and other parts of Africa, the abundance of water hyacinth clogs lakes and waterways. The destruction of ecosystems due to the weeds also have an economic impact by getting in the way of the locals' livelihoods.

During the rainy season, the weeds prevent floodwaters from flowing through irrigation canals and into the rivers. They also intrude on the fragile ecosystems of mangrove forests, which are necessary for preventing floods and soil degradation when sea levels rise.

Since 2014, Green Keep Africa has been using the water hyacinth to create a fibrous substance that can be used to clean up oil spills. Commercial director Geneviève Yehounme said, 'First, to take out the plant from the environment. And second, to provide an absorbent that could be used to control industrial pollution.'

The company gathers weeds from Lake Nokoué where the water hyacinth has been a disturbance to the local communities. The livelihood of many locals relies on fishing, which 'is jeopardized because of water hyacinth,' said Yehounme. Massive amounts of water hyacinth create thick mats of weeds that overtake fishing zones and block the sunlight and oxygen that fish need.

After harvesting the plant, the hyacinth is dried out and broken down into a loose fiber they call GKSORB. The fiber can then be used to stuff bags, pillows, and socks. These products are used as emergency spill kits that can soak up to 58 gallons of liquid, including oil.

Puma Energy Benin and other oil and gas companies purchase these products, shared the company. The fiber is an eco-friendly alternative to cleaning up spills on the land and in water.

They are also useful for cleaning up oil spills. In the recent Mauritius oil spill, people all over the world donated hair to help with the clean-up, since fibers best absorb oil. Also, some sorbents are synthetic, which are harmful to the environment despite oil spills being cleaned up.

The fiber used to absorb oil spills are also disposed of properly since Green Keeper Africa works with a partner that burns the oil-soaked stacks. As the stacks are incinerated, the energy is used to power a cement kiln. Yehounme explained that the company does not want to 'bury the waste, so we make sure that the loop is closed from raw material to the destruction of the waste.'

There are also social benefits of Green Keeper Africa's use of water hyacinth by creating jobs. More than 1,000 people from local villages (80% are women) have been hired to harvest the plant. The company hopes to expand its environmental and social impact to nearby countries which has been postponed due to the pandemic.