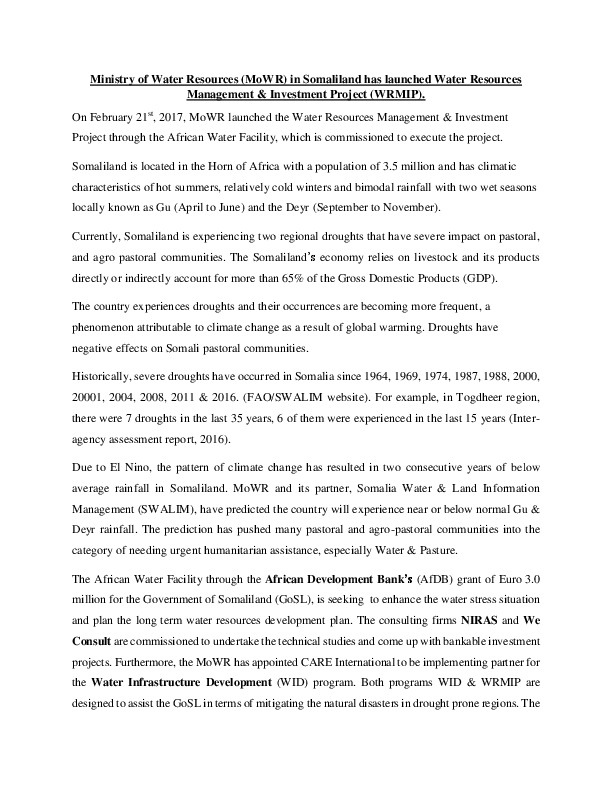 Somaliland water stress & drought-prone country has launched the WRMIP grant from African Water Facility (AWF). This is the first time AFW has supported the fragile country of Somaliland.

Somaliland is located in the Horn of Africa with a population of 3.5 million and has climatic characteristics of hot summers, relatively cold winters and bimodal rainfall with two wet seasons locally known as Gu (April to June) and the Deyr (September to November).

Currently, Somaliland is experiencing two regional droughts that have severe impact on pastoral, and agro pagro-pastoralnities. The Somaliland’s economy relies on livestock and its products directly or indirectly account for more than 65% of the Gross Domestic Products (GDP).

The country experiences droughts and their occurrences are becoming more frequent, a phenomenon attributable to climate change as a result of global warming. Droughts have negative effects on Somali pastoral communities.

Due to El Nino, the pattern of climate change has resulted in two consecutive years of below average rainfall in Somaliland. MoWR and its partner, Somalia Water & Land Information Management (SWALIM), have predicted the country will experience near or below normal Gu & Deyr rainfall. The prediction has pushed many pastoral and agro-pastoral communities into the category of needing urgent humanitarian assistance, especially Water & Pasture.

The African Water Facility through the African Development Bank’s (AfDB) grant of Euro 3.0 million for the Government of Somaliland (GoSL), is seeking to enhance the water stress situation and plan the long term water resources development plan.

The consulting firms NIRAS and We Consult are commissioned to undertake the technical studies and come up with bankable investment projects. Furthermore, the MoWR has appointed CARE International to be implementing partner for the Water Infrastructure Development (WID) program.

oth programs WID & WRMIP are designed to assist the GoSL in terms of mitigating the natural disasters in drought prone regions. The hope is that both programs will complement each other and add to the National Development Plan II of Somaliland. The WID program is specifically designed to support in particular, the Hawd & Sool Plateau regions.

Both projects will address the drought mitigation aspect and will assist the MoWR in reaching Sustainable Developments Goals (SDGs) of 2030, which coincides with the Somaliland Vision of 2030.

Recently, AfDB has committed to invest in Somaliland nearly $25 million in total in the next three years. This is the first time AfDB has identified investment priorities & opportunities in Somaliland due to its stability and economic growth.

Below is the breakdown of the investment: