Technologies to Help Get Closer to Water and Sanitation SDG Goals 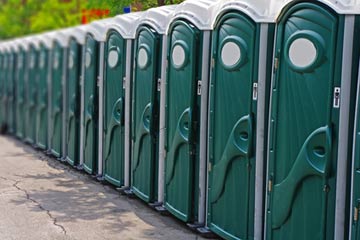 I was reading the latest publication by Unicef “Strategy for Water, Sanitation and Hygiene 2016-2030”, which highlights that much more is yet to be done in order to achieve SDC goals.

Almost 2.6 billion people worldwide use unsafe toilets or defecate in the open, which is around 40% of total world population. Lack of adequate sanitation causes severe diarrhoea, which kills 1.8 million people each year, and it represents a major threat to the environment. 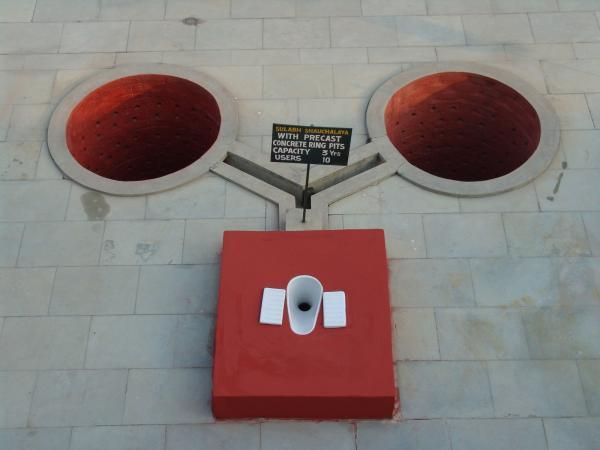 Consists of a pan with a steep slope of 25°-28° and an especially designed trap with 20 mm water seal requiring only 1 to 1.5 litres of water for flushing, thus helping conserve water. It does not require scavengers to clean the pits. There are two pits of varying size and capacity depending on the number of users.

The capacity of each pit is normally designed for 3 years usage. Both pits are used alternately. When one pit is full, the incoming excreta is diverted into the second pit. In about two years, the sludge gets digested and is almost dry and pathogen free, thus safe for handling as manure.

Digested sludge is odourless and is a good manure and soil-conditioner. Looking at the Indian society, where manual scavenging is practised at a large scale, these toilets are very popular. Sulabh Int claims that till date they have constructed 1 M toilets in India.

Ghanaian Kweku Anno developed a simple, compact, on-site composting system that limits odor and avoids many of the problems of pit and ventilated pit latrines. The Biofil Digester system operates on the principle of aerobic decomposition, as a ‘living filter’, where a habitat is created for natural organisms to break down waste and product.

The digester is a simple compact on-site organic waste treatment system that uniquely combines the benefits of the flush toilet system and those of the composting toilets and eliminates the disadvantages and drawbacks of both systems. The key difference between this system and the traditional septic tank system is the rapid drainage of water from the waste product. This allows the system to operate more efficiently under aerobic conditions, eliminates the foul smells associated with anaerobic decomposition, and reduces the need for excavation of a large septic tank to deposit waste water and sludge.

The system is able to break down solid organic waste up to thirty times faster and more efficiently than the traditional septic system. 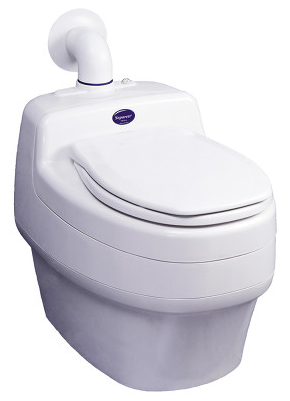 The xRunner toilet is a waterless urine-diverting portable toilet that was developed by Noa Lerner, an Israeli industrial engineer. The toilet separates urine from feces and minimizes odor due to its enclosed and detachable pan.

The system is unique because of its potential reliance on community entrepreneurs, who can arrange weekly collection and processing of the contents of the detachable pans. 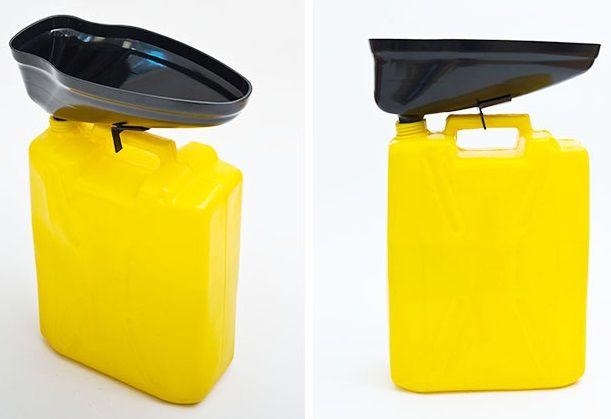 Design without Borders (DwB) teamed-up with Sustainable Sanitation Design to design the ideal toilet. The idea is to have a unisex urinal which can be used for nature-call any time, especially in the slum area, where the one toilet is shared by 1000 people. The goal was to create a value-chain around the waste product, urine.

People can capitalize on their waste, since the urinal refines the urine into high quality fertilizer that they can sell.

At only $3, it is widely affordable to all slum dwellers, and this unisex urinal provides clean, accessible, and safe access to toilets inside homes. It has been built to prevent odour, and requires minimal maintenance. 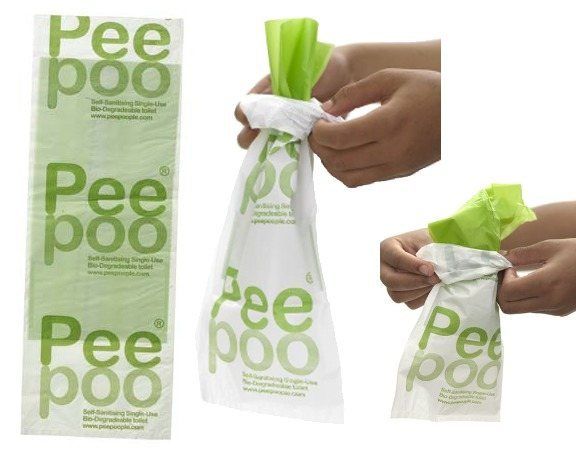 Peepoo is in the form of a slim biodegradable bag, with an inner layer that unfolds to form a wide funnel. It is easy to store, handle and use. The urea inside Peepoo inactivates harmful pathogens (bacteria, viruses and parasites) within four weeks.

Peepoo is made of a bio-plastic that meets EU standard EN13432. This means the plastic not only disintegrates, but the molecules break down into carbon dioxide, water and biomass. In practical use in Kenya and Pakistan 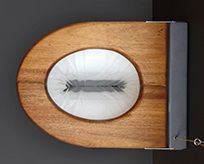 The Loowatt toilet contains human waste within biodegradable film, with a unique odor-inhibiting system. The waste is then stored in a cartridge for periodic emptying.
The Loowatt sealing unit can be built into toilets of any shape, size and specification.

This toilet is designed for linking to anaerobic digestion systems, to provide a source of biogas for cooking, electricity, and other applications. This creates the exciting opportunity to offset capital costs with energy production. 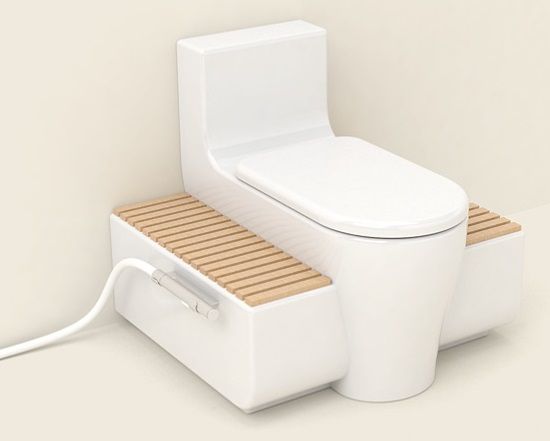 Sabine Schober’s toilet uses the Terra Preta Sanitation technology, which treats urine and excrement by mixing it with charcoal to produce highly fertile soil for reforestation. It is also unique because it can be used in both the sitting and the squatting position.

For only about $70, the toilet can be built using three robust components made of sanitary ceramic on the outside and a plastic container on the inside that collects pee and poo. The design allows for a water sprayer for cleansing, which can be attached to the side of the toilet.

The treated excrement, which can be used as compost, can be removed from the back of the toilet. Designed by industrial designer Sabine Schober, this toilet was the winner of the 2013 World Toilet Organization Design Award. 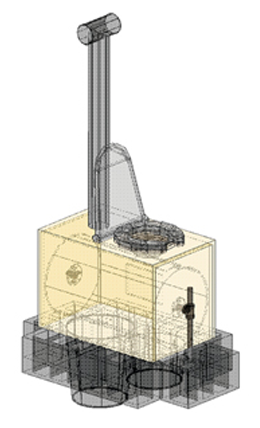 It starts with a horizontally mounted rotating drum, much like a garden composter, that sits inside a box. User pee and poop into the drum, cover it with saw dust or dry leaves or ash, spin it once a week. Natural aerobic decomposition eliminates dangerous pathogens and foul odors.

It also reduces the volume of the waste by 80%, so the user only needs to empty the drum out once every 2 months. 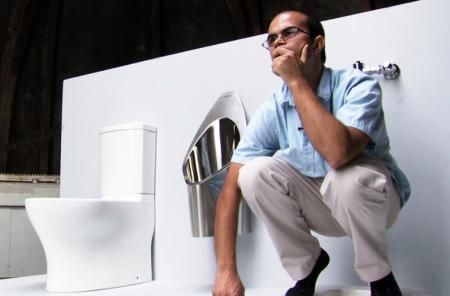 The Caltech toilet is solar-powered. It was developed by a team led by Caltech's engineer Michael Hoffmann that won the Bill and Melinda Gates Foundation's Reinvented Toilet Challenge in 2012.

The toilet integrates an electrochemical reactor to treat wastewater, providing a safe and inexpensive way to dispose of human waste. The great thing about this technology is that it is designed so that everything can be repaired with just a single screwdriver. The parts can simply be replaced. 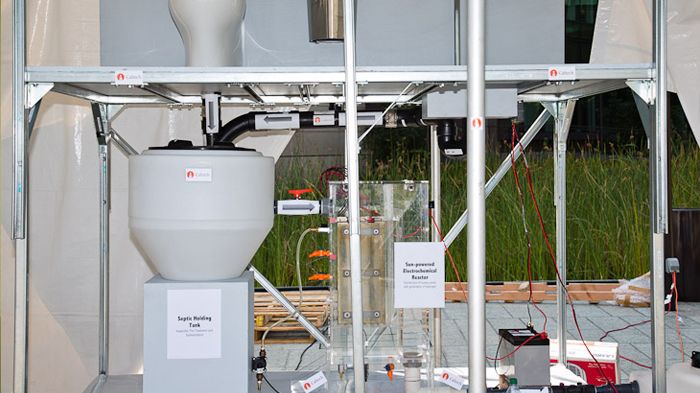 Loughborough University has won a prestigious prize of $60,000 in an international competition organised by The Bill and Melinda Gates Foundation to develop a reinvented toilet that is clean, safe, durable and affordable for the poor without the need for connection to electricity or a sewer.

It uses a process called Continuous Thermal Hydrocarbonisation which kills all pathogens to create safe to handle, valuable material and uses power from heat generated during processing.

The toilet is designed to work in both single-family and multi-user contexts with daily running costs of just a few pence per person.

Engineers at Rice University have captured the power of the sun to invent solar steam sterilization unit that uses light-absorbing nanoparticles that can power autoclaves and sanitize human waste. The project has been awarded a grant by the Bill and Melinda Gates Foundation as a part of their efforts to improve the living conditions of the world’s poor.

The solar steam system functions by using nanoparticles to soak up the sun. The nanoparticles heat up surrounding water quickly, causing it to vaporize into steam. The process can even work when the water is ice-cold, boasting an overall efficiency of 24 percent as compared to solar panels which only operate at an efficiency of 15 percent.

While it is possible to generate electricity this way, the researches decided to first focus on the problem of sanitation. It was tested with two other structures, one that was able to sterilize medical and dental equipment, and the other to treat human waste. The system can handle the contributions of a family of four with only two applications a week.

A breakthrough sanitation system that is environmentally friendly with strong financial and social benefits. The toilet has been developed by Eawag and designed by EOOS as part of  the "Reinvent the Toilet Challenge" funded by the Bill & Melinda Gates Foundation. 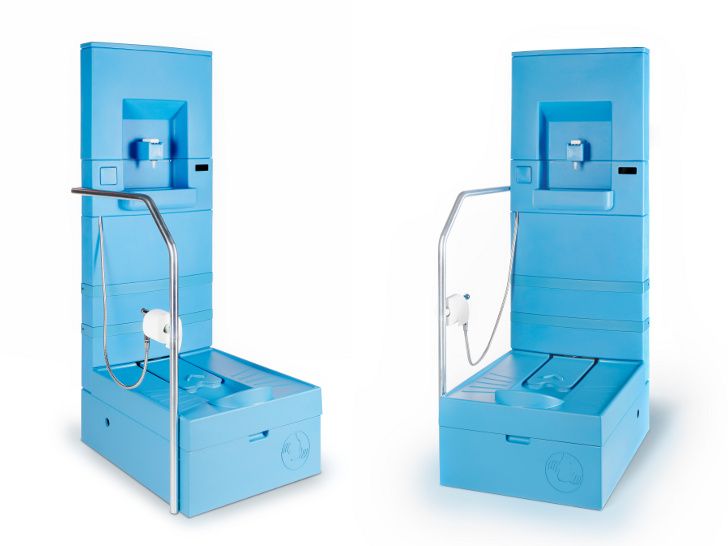 The Blue Diversion toilet exists on prototype level, it is not market-ready yet.

It is attractive and easy to use, and suitable for both washers and wipers. It provides safe running water 24/7 and is designed for 50 uses per day (~10 users). The toilet presents a next generation model of the urine diverting dehydrating toilet (UDDT), which is usually not very popular among users, especially amongst washers.

Toilet was amended with a flush function, a washbasin for hand washing, and a showerhead for personal hygiene. The water provided for these functions is water that has been recycled and treated on-site in the back wall of the Blue Diversion Toilet.

Guaranteeing safe and high quality water without high electricity requirements is possible only because the water, urine and faeces are separated into three different streams at source