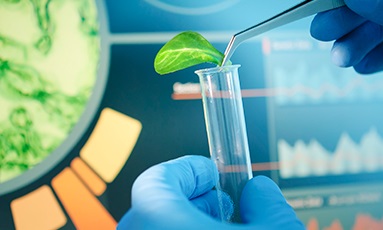 Several years ago, I made it through a rigorous selection process for a research position at a German university and landed on the final shortlist, which included just one other person. It was a woman, and although she and I were judged to be equally qualified, she got the job.

The university chose her because of her strong credentials, and also because the university had a policy to prevent unconscious discrimination in hiring: In instances where multiple candidates were deemed equally qualified, women candidates would be prioritized.

A lot remains to be done to increase the participation of women in science — just 28% of the world’s researchers are women.

This is also an issue for the agricultural sciences. Worldwide, countries with young agricultural research institutions are likely to have fewer female agricultural researchers on board. Take for example West Africa, where the World Bank has made significant efforts to build research capabilities in agriculture. In West Africa, the percentage of female researchers ranges from 4% in Guinea to about 20% in Ghana. As a reference, the Netherlands, a country with a mature innovation system, has a female scientist participation rate of 37%.

Improving the gender balance in the agricultural sciences matters

The belief that men are inherently better than women in the agricultural sciences is a myth — but it does continue to persist. One of the few female researchers at the Bolivian Agricultural Innovation Institute asserts that she has demonstrated equal or even better capabilities for agricultural research than many male researchers. I could not agree more. During the years I have worked in Bolivia, where the outdated belief in male superiority is widespread, I have never stepped into laboratories as well managed as those run by female scientists. Nancy Huanca was engaged in the strategic research program for wheat and now, at the Genbank, is in charge of the largest collection of quinoa genotypes worldwide –more than 3,000 accessions for the superfood. © World Bank
“I am so proud, last year I finished my thesis and obtained the degree of agricultural engineer despite many hurdles along the way… My aspiration is continue working as a researcher,” — Nancy Huanca.

The under-representation of women in the agricultural sciences is a matter of concern, when one takes into account the development challenges in food and agriculture. In many regions and countries, agriculture production has been “feminizing” as men seek employment opportunities off the farm, and some products are increasingly under women’s control.

Female researchers bring an essential perspective to bear when it comes to understanding the particular needs of women at the grassroots level and providing them with useful technology. Who better to design agricultural technologies for women than women scientists who understand women’s physical needs and daily challenges? In addition, there are certain crucial fields where women must take center stage. For instance, developing nutrition-sensitive technologies with only male researchers is wishful thinking and is unlikely to yield the most impactful results.

How we can increase the participation of women in agricultural research

A young agronomist at INIAF recently told me how proud she was when she finished her degree last year. I could well understand her pride, because in countries such as Bolivia, for a woman to obtain a bachelor’s degree in the agricultural sciences or other technical fields, is akin to the situation faced by women who entered politics in the 1930s. But the path does not end there. To engage effectively in research, women must continue their scientific training, yet the percentage of women completing MSc and PhD degrees is even smaller. For about ten years Rozzana Medina has been managing the laboratory of in vitro culture. The Bank stores the entire collection of Bolivian Andean tubers, among other crops. © World Bank

“ We women show equal or even better capabilities for agricultural research compared to our male counterparts when we have the opportunity… I am proud to manage the Bolivian bank of in vitro cultures… Increasing the numbers of women at INIAF will enrich the work of the institution, ” — Rozzana Medina.

In counties in which cultural and social pressures pose particular obstacles for women, gender targeted measures may be an appropriate mechanism for increasing the access of women to secondary and tertiary education. For example, a project financed by the World Bank to support Peru’s National Agricultural Innovation System includes a scholarship program for master’s degrees, with the ambitious target of awarding at least 35% to women.

Often during discussions of mainstreaming gender in agricultural development projects it is recognized — correctly in my opinion — that the interests of women tend to get overlooked because many women are shy and reluctant to speak up in public. In the domains of research and development, something similar happens. I have heard testimonies from several women engaged in research, describing how challenging and often frustrating it has been for them to be heard and make their way in a male-dominated field.

Recently I came across an exciting initiative to support women agricultural scientists: the African Women in Agricultural Research and Development, which is hosted by the World Agroforestry Center and focuses on strengthening the science and leadership skills of women. In the same vein, throughout the last decade, the CGIAR has been working to assist young women researchers to grow professionally, among other gender-related initiatives.

I still recall how painful it was for me to lose the chance to become a researcher at a well-known international university. Now, however, I see that the German university made the right choice. Research institutions need pro-active policies to counter unconscious bias and bridge gender disparities.

In Bolivia, the World Bank has tried to help INIAF remove hurdles to hiring female researchers, with mixed results. We have learned that inclusive institutional policies must cover a wide spectrum of areas, from recruitment to work scheduling and provision of child care. We have learned also that measures to facilitate professional advancement of women scientists require time to come to fruition. This may explain why it took 25 years for the Agricultural Research Co-op (EMBRAPA) in Brazil to double its percentage of female researchers.

Feeding the world now and in the coming years is a daunting challenge. If the challenge is to be addressed successfully, all available resources will need to be mobilized. In this light, we cannot ignore the enormous contribution that women can make to agricultural research and development. Clearly, the world needs more women scientists.