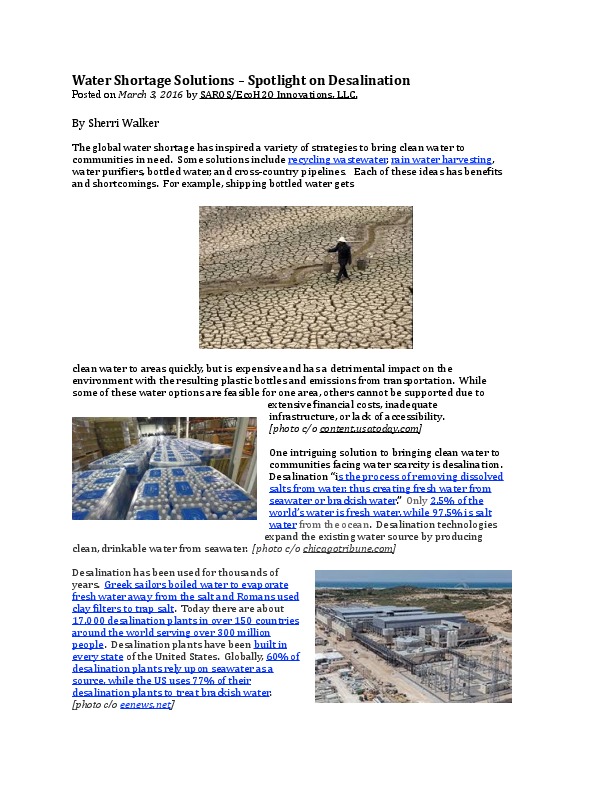 The global water shortage has inspired a variety of strategies to bring clean water to communities in need. Some solutions include recycling wastewater, rain water harvesting, water puriHiers, bottled water, and cross-country pipelines. Each of these ideas has benefits and shortcomings. For example, shipping bottled water gets clean water to areas quickly, but is expensive and has a detrimental impact on the environment with the resulting plastic bottles and emissions from transportation. While some of these water options are feasible for one area, others cannot be supported due to extensive financial costs, inadequate infrastructure, or lack of accessibility.  One intriguing solution to bringing clean water to communities facing water scarcity is desalination. Desalination “is the process of removing dissolved salts from water, thus creating fresh water from seawater or brackish water.” Only 2.5% of the world’s water is fresh water, while 97.5% is salt water from the ocean. Desalination technologies expand the existing water source by producing clean, drinkable water from seawater.  Desalination has been used for thousands of years. Greek sailors boiled water to evaporate fresh water away from the salt and Romans used clay Hilters to trap salt. Today there are about 17,000 desalination plants in over 150 countries around the world serving over 300 million people. Desalination plants have been built in every state of the United States. Globally, 60% of desalination plants rely upon seawater as a source, while the US uses 77% of their desalination plants to treat brackish water. Critics of desalination often target the expense of building large plants, the cost of producing water, and the adverse effects on the environment. “Seawater desalination remains among the most expensive water-supply options available,” says Heather Cooley, co-director of the Pacific Institute Water Program. Desalination plants cost hundreds of millions of dollars to build. For example, the Sorek plant built in Israel in 2013, cost about $500 million to build and produces about 10% of Israel’s water supply. The newly built Carlsbad, California desalination plant which produces 50 million gallons per day (10% of the county’s water use) cost $1 billion to build and is being hailed as a “model for the state” which faces ongoing water shortage issues. These high costs make large-scale desalination plants an inaccessible option for smaller communities who lack the funding or infrastructure to build and operate them. In addition, water produced from desalination plants is costly, averaging $2,000 - $3,000 per acre-foot -- roughly the amount of water a family of Hive uses in a year. This price is about double that of water obtained from building a new reservoir or recycling wastewater, or four times the cost of obtaining "new water" from conservation methods. Lastly, typical desalination plants use extensive amounts of fossil fuels, electricity, and other resources to operate. For example, the Carlsbad California plant “uses an enormous amount of energy -- about 38 megawatts, enough to power 28,500 homes -- to force 100 million gallons of seawater a day through a series of Hilters” to create drinkable water. Desalination plants also have a negative effect on local habitats and wildlife including Hish, larvae, eggs, and other sea life. New studies and laws hope to change the way desalination plants are built today in order to reduce this impact because, as Charles Lester, Executive Director of the Coastal Commission, states, "It all adds up." The benefits of desalination are that it can provide communities facing water shortages with a constant supply of water. Heather Cooley, Water Program Director at the Oakland-based environmental think tank PaciHic Institute, explains that desalination is “a reliable supply, independent of weather conditions like drought. But it's still among the most expensive water supply options." One desalination venture that avoids both the extensive cost and the detrimental effects to the environment caused by traditional large-scale desalination plants is SAROS [Swell Actuation Reverse Osmosis System]. SAROS uses only wave energy to desalinate seawater, meaning that there are no fossil fuels or electricity required to produce fresh water.  This means that there are also no emissions created during SAROS’ desalination process.  In essence, SAROS leaves no carbon footprint, works completely off-grid, and is environmentally friendly. Justin Sonnett, Co-Founder and Engineer for the SAROS venture, explains that SAROS “is perfect for coastal communities that have access to ocean water but are looking for a water supply solution that will have minimal impact on the environment.” Chris Matthews, also a Co-Founder and Engineer at SAROS, adds that SAROS is a practical, sustainable solution for communities that “lack the infrastructure to support a large desalination plant.” In addition, once a SAROS unit is shipped and set up there are no additional shipping necessities which can add to both the Hinancial and environmental cost of traditional desalination plants and other water supply strategies.  As the world continues to focus on the growing water shortage needs, innovative approaches to providing drinkable water become invaluable. When these solutions are also sustainable and protective of the environment, we all benefit. Sherri Walker is a Communication Specialist and blogger for SAROS/Eco-H2O Innovations, LLC.