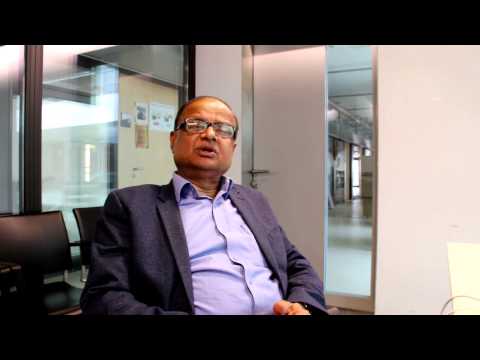 Community-Led Total Sanitation (CLTS) is an innovative approach for empowering communities to completely eliminate open defecation (OD). It focuses on collective hygiene behavior change stimulated by facilitators from within or outside the community. CLTS involves no hardware subsidy and does not prescribe latrine models.

Our water network research team had the pleasure to interview Dr.Kamal Kar about the CLTS approach.

1. What is the Community-led Total Sanitation(CLTS) approach?

Community-led Total Sanitation (CLTS) is an innovative approach for empowering communities to completely eliminate open defecation (OD). It focuses on igniting a change in collective sanitation behaviour, which is achieved through a process of collective local action stimulated by facilitators from within or outside the community. CLTS involves no up-front, individual household hardware subsidy and does not prescribe latrine models.

2. How was this idea formed? What were the main triggers that led you to believe in the community level approach to tackle the sanitation problem?

The seeds of CLTS were planted in my mind in 1999-2000, when I was in Mosmoil village, Rajshahi district in Bangladesh, examining the impact of a traditional sanitation programme of Water Aid and its implementing partner, Village Education Resource Centre (VERC), which involved subsidies and prescriptions of latrine models.

I was impressed to see the nice toilets and infrastructure in some households in the community. Being an agricultural and natural resources specialist, I always ventured into the farm lands where the programmes were implemented and every day I would step on raw shit on my way to work. I was shocked to see the co-existence of the ‘beautiful' toilets built by Water Aid & partners and the sight of open shit. This triggered the serious question in my mind as to what would be the overall impact of Water Aid and its partner VERC's water and sanitation programme.

I was convinced that the programme was implemented perfectly and all the deliverables were in place. But, who benefitted from this programme was a serious question hovering in my mind. This question led me to enquire about the incidences of diarrhea, cholera, stomach ailments and water-borne diseases among the beneficiaries of the project and also the costs incurred by them to treat these diseases.

I learnt that there was almost no impact on the reduction of the incidences of these diseases. When I further enquired about the lack of any positive impact, the community said that most people defecate in the open and some areas of their village were smelly and dirty. The situation became worse during the monsoons which brought devastating outbreaks of cholera and diarrhea in its wake. This led me to believe that the issue of open defecation can be tackled by approaching the community as a whole and not addressing the problem at the individual household level.

3. Is it aimed at communities at urban or rural areas? Is there a change in the attitude of people from these two contrasting areas in adopting the CLTS method?

CLTS approach is aimed at communities in both urban and rural areas.

In communities where open defecation prevails, people react in the same manner when they are triggered. CLTS has established the point firmly that no human being, rich or poor, wants to live in shit. Once understood through their own visual analysis, communities stop the practice of open defecation and with the available resources and skills they do their best to become open defecation free (ODF).

4. Are there a sequence of steps involved in the CLTS method implementation?

The following is a rough outline of the sequence of steps* and their brief explanation :

Pre-triggering involves establishing relationships between the facilitators and the community which has been selected for triggering. They must take a tour and ask questions to get an idea of the size of the village, population and any other sanitation programmes being implemented (including subsidy). They must find out a suitable date, time and place for the triggering so that it does not clash with market day or any other village event, such as a wedding or funeral.

Triggering is based on stimulating a collective sense of disgust, shame and fear among community members as they confront the crude facts about mass open defecation and its negative impacts on the entire community. The basic assumption is that no human being can stay unmoved once they have learned that they are ingesting other people's shit.

Triggering is divided into Part A ( Visual analysis by the community)

and Part B (Encouragement to continue and build a platform for post-triggering).

The post-triggering phase is very important as it ensures that the momentum and energy created by a successful CLTS triggering in a community is sustained and improvements in latrines and hygiene practices are made over the long term.

In this phase action planning and participatory follow up and monitoring by natural leaders and community members is facilitated by facilitators.

ODF status is a firm basis for progressing up the sanitation ladder, hygiene and behaviour change, creating a healthy environment, and the generation of livelihoods. So, in this phase CLTS is often used as an entry point strategy for other community-led development initiatives.

* This is just a brief overview, to know more about CLTS please read the Handbook on Community Led Total Sanitation by Kamal Kar with Robert Chambers that can be downloaded from www.cltsfoundation.org .

5. Are there some important DO and DON'T in the attitude of the volunteers and CLTS practitioners on the ground?

Some of the Do's for CLTS facilitators are: adopt the attitude of a learner when visiting a community; encourage and empower; learn more; have faith on the community's ability to change; trust traditional knowledge; and be inclusive.

The Don'ts are: educate, lecture or tell people what to do; prescribe latrine models; try to solve their problems; make false promises; interrupt; overlook women, children and others who often get left out, etc.

6. Does the community come up with innovative approaches to tackle the sanitation problems in their neighborhoods? Could you give us some examples?

In Bangladesh, some community-led financing innovations were weekly savings by small women's group and lottery draw each week to enable one family to purchase latrine.

7. The CLTS approach has been adopted in several countries. What is the role of the government and public sector in these countries in implementing the CLTS practice? How are the differences in the approach of one country over the other?

The ideal role of a government in any country that has experienced success due to the community initiatives to become ODF should be as follows:

However the role played by governments in different countries are not of the same standard as each country context is different in terms of policy environment; and their political, economic and social situation. There is also a difference in the attitude and understanding of the government officials, donors and implementing agencies among countries towards community empowerment, and it takes advocacy efforts within each country context to get the national government to create an enabling environment for CLTS implementation and scaling up in each country.

8. What are the major lessons you have learned by adopting the CLTS approach across different cultures?

The one most important lesson that we have learned from the local cultural perspective is that the CLTS approach cuts through all taboos and traditions.

There was a popular belief in Madagascar's Sakalava community that pit latrines were no good because they not only pollute the earth but also dishonor the same earth where their forefathers were buried. However, after a few successful triggerings in the Sakalava community, ODF villages emerged which proved that the community members prioritized human health over their traditional beliefs. This was further confirmed by the declaration of the first ODF village by the Sakalava king and he said that their ancestors would be happy to see improvements in child health and decrease in deaths of their children due to diarrheal diseases.

There are also communities in Africa which believe that if a woman defecates in a pit latrine then she will suffer a miscarriage, but it has been observed that a successful CLTS triggering overcomes such social and cultural challenges.

9. What are the major challenges in the implementation of CLTS approach? How are you tackling these challenges?

It is quite unfortunate to see that there is not a single developing country which is ODF. The major challenges in the implementation CLTS are not at the community level, but more at the institutional and government level. Communities have proved that given an opportunity they can solve their problems with their own collective approach. More than 65 countries have hundreds and thousands of ODF villages because they implemented the CLTS approach. In most of these ODF villages, the incidences of diarrhea and cholera are strikingly low or are nil as compared to other villages in a country. None of these communities waited for external support.

Government and funding agencies have to sort out a strategy for scaling up and ensure coordination between various actors.

We don't believe in tackling the challenges from outside. Our strategy is to influence the government to scale up the success of the communities and bring up natural leaders, community leaders, chiefs, government officials, and create islands of success. This way we try to create a positive force within a country and build strong linkages with the country's decision-makers and political leaders and help them think and develop their own strategy.

However, the challenge is that some countries are grappling with subsidies for reasons known to them, and some countries are increasing individual household subsidies, one example of this being India. CLTS cannot be combined with such models, and hence doesn't work in such an environment.

10. How can society and other practitioners get involved with your organization to help advance the CLTS method around the world?

Since CLTS Foundation strives for an ODF world with diarrhea, cholera and other waterborne diseases eradicated, we welcome everyone with faith in community empowerment.

There are different ways of getting involved and helping us directly and indirectly through various means: