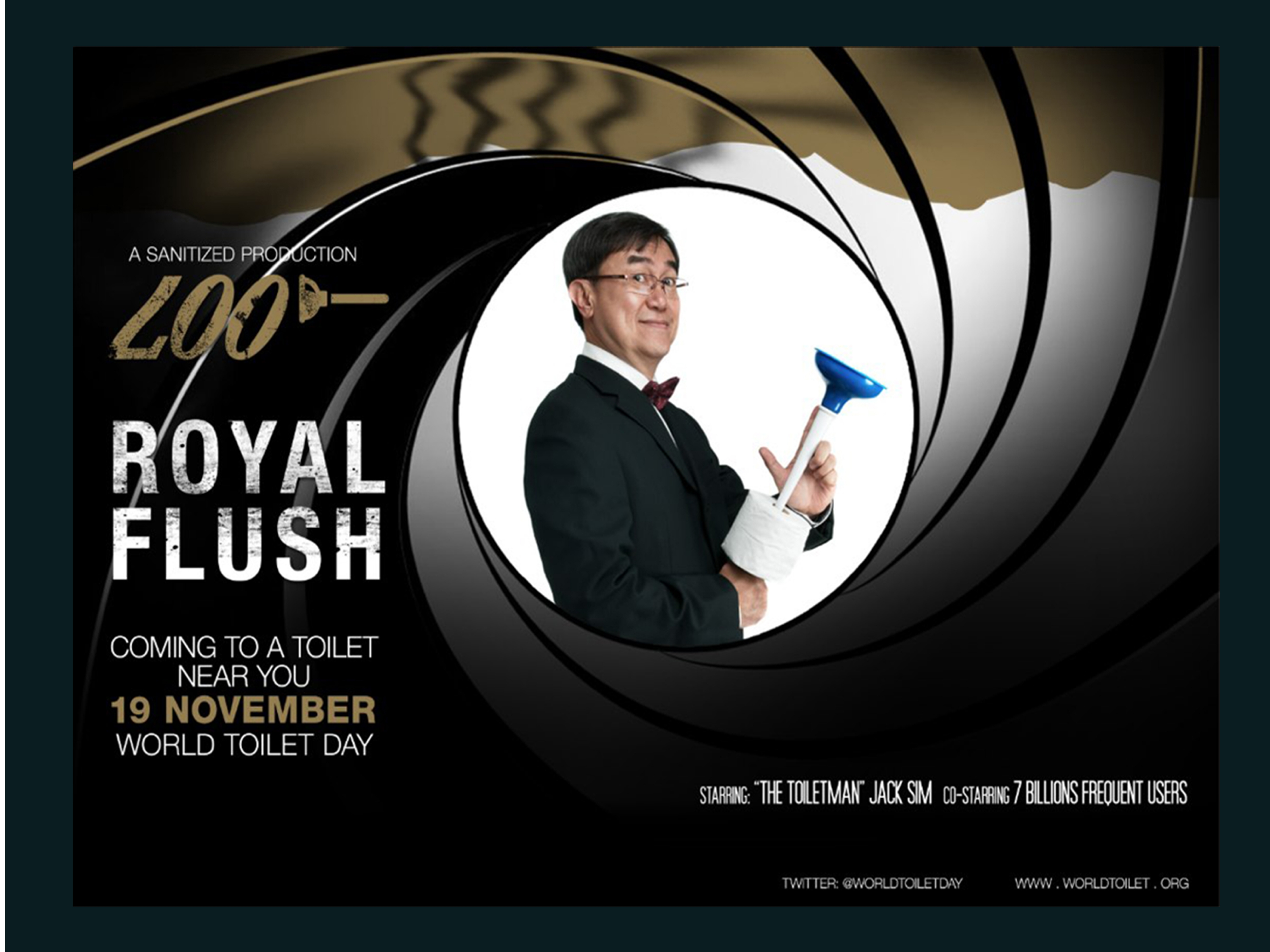 Three years of an individual's life are spent on the toilet. The average person uses the toilet approximately six times per day, 2.200 times per year.

However, there are 2.6 billion people in the world who have no access to basic sanitation and a huge number of children die from diarrhea each year unnecessarily.

This information motivated Jack Sim to dedicate his career to toilets and become a social entrepreneur and sanitation advocate. 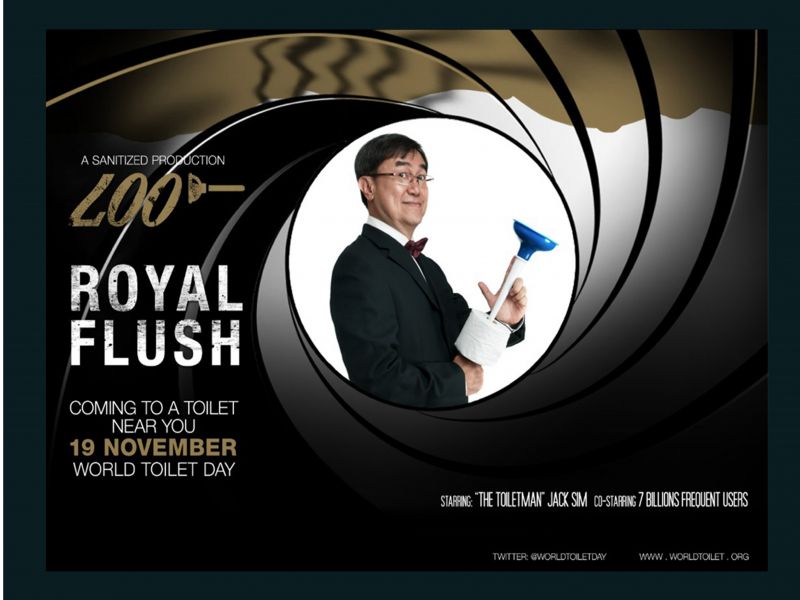 Q1. Thank you for taking the time to talk to us Jack. Would you please start by telling us about your professional background and how you became a sanitation advocate?

I did not attend university so I started a business at age 24 retired at age of 40 after 16 successful businesses. After attaining financial independence, I felt money has no more meaning because since time is more precious than money, exchanging time for money is actually a loss-making transaction!

I wanted to do something useful and searched for neglected agendas to serve. When my Prime Minister said we should measure our graciousness according to the cleanliness of our public toilets, I felt this is my calling and started the Restroom Association of Singapore. Later I realized there were 15 toilet associations in the world so I offered them to start World Toilet Organization as a world body.

Q2. What is the World Toilet Organization and what is the idea behind it?

Toilet was a taboo subject in 2001, what you don't discuss, you can't improve. Instead of calling a spade a spade, the development community called Toilets and Sanitation a Water issue. So lack of sanitation and poor hygiene conditions continues to kill both adults and children. We've got to do something.

The media would not report on the professorial language like "Fecal Sludge Management", so I decided to make Toilet Sexy by calling ourselves the WTO, World Toilet Organization.

The pun on World Trade Organization works and soon we were able to put Toilets and Sanitation on center-stage of the global media with a collective global outreach of more than 3 billions eyeballs.

The media attention attracted the politicians who started winning elections by promising the electorates toilets for their popular votes. This changes the entire landscape as donors started to switch some fundings to sanitation. Today, Prime Minister Modi of India is building 110 millions toilets under his Clean Indian Campaign "Swachh Bharat".

This story proves that you don't need much resources to start a global movement if you open-source it and let everyone take ownership of the mission. The entire chain reaction leverages on each other and was able to mobilize the entire world into a common goal of getting everyone access to proper sanitation soon.

Q3. What is the connection between the availability of safe toilets and community health? What is the relationship between investments in toilets and health care in general?

We all know that prevention is cheaper than cure. It makes no sense to wait for people to be sick to cure them when you can prevent the illness at root cause. The British Medical Association even named the Toilet as the best medical advance in the last century.

When I was young, my country Singapore was a poor country. But we invested in clean water and sanitation in order to maintain a productive workforce that can be trained and in turn attract more foreign investments and jobs creation. Today Singapore is the 3rd highest per capita income in the world. A sick nation cannot be competitive. Only a healthy one can win. That is why the toilet is so important.

Q4. Why do you think toilets are so neglected today and are even a taboo?

People are unable to reconcile to the fact that they are able to produce a pungent smell. They felt offensive and are in a state of denial, so they'd rather not discuss about it. But things have improved over the last 17 years of our work. Shit is gaining popularity.

We've moved it from taboo, to funny, to sexy and we hope to move it to a normal daily conversation topic without any fear of being rude. We still have to develop a gentrified vocabulary to help discourse. Any linguist or cultural experts who can help us on gentrification of the Toilets, please contact us.

Q5. When it comes to sanitation, water receives much more attention and investments than toilets. Why do you think that is and do you this will change in the future?

In the past, they put Sanitation under water, and so the Sanitation agenda literally goes under-water, drowned. But in the future, we want Toilets to be as normal to talk about as Sex. We already have toilet movies, songs and arts. Poop culture will become Pop culture soon.

Q6. What makes your approach to sanitation unique and successful?

WTO has a unique blend of humor and serious facts that is original all the time. In the development sector, people are not really funny at all, they don't joke and laugh about their agendas. They're too serious. A taboo subject is news-worthy. So our humor/Facts blend works all the time in all languages and cultures.

Q7. Tell us about World Toilet Day and its importance. How has it changed the world so far?

19 November was the founding day of World Toilet Organization and we call it World Toilet Day. After gaining continuous prominence year upon year, we proposed it for adoption by the UN General Assembly and received unanimous approval from all 193 countries members. Since then Toilets and Sanitation became an official agenda without stigma in the official sectors.

Q8. What are the future plans for to the World Toilet Organization?

WTO's mission straddles both the poor and the rich. Our goal is " A Clean and Safe Toilet for Everyone Everywhere and Anytime it is needed." We'll work until this happens. I'm planning also a music Concert for Dignity in New York soon.

Q9. You are the recipient of numerous awards, to mention some - Time Magazine Hero of Environment 2008, Social Entrepreneur of the Year Award, Schwab Foundation for Social Entrepreneurship, Geneva 2006. How do these achievements motivate you to continue your work?

These awards are not for me. They are there to legitimize our work and bring forth supporters. I've seen so many good people who started off trying to save the world end up chasing the fame game. This people became the obstacle to their own mission.

Q10. Finally, do you have any advice for young entrepreneurs in the WASH sector?

To the young entrepreneurs:

If you can price the externalities, you can make sanitation profitable to impact investors.